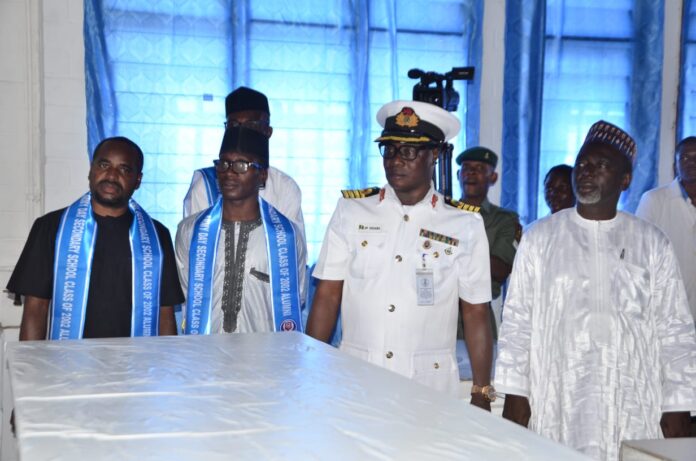 Class of 2002 Alumni of the Army Day Secondary School (ADSS) Mogadishu Cantonment, Asokoro has handed over the newly renovated and remodeled chemistry laboratory to the school.

The project was executed to commemorate their 20th Anniversary of graduating from the school.

The Commander, Defence Headquarters Garrison (DHQGar), Major General Elias Attu, commended the old students for remembering and giving back to the school in recognition of their formation period.

The Comd, who was represented by the Commanding Officer Administration, DHQGar, Navy Captain Hassan Dogara, said that the DHQ recognised that education was an expensive venture hence its effort to continue to invest in it.

He said that the investment in education had been replicated in the army, the Navy and the Air Force through all their various schools.

According to him, it is not easy for members of a set to come together and develop a part of the school academic adventure to remodel and furnish a chemistry laboratory.

“I am most impressed, and I believe that the action by the alumni is very commendable and it is going to go a long way to enrich the cultural context.

“Furthermore. I’m very impressed by the introduction of the alumni members and what that had portrayed, especially to the present students, is that the laboratory or the investment in the school that has been put by your Senior colleagues meant that you have no choice but to make sure you excel even better than them.

“I am sure while you were seated and listening to them, you recognised that they are quiet, very important members of the Nigerian society.

“And the only way you could do even better is for you to take advantage of the facility that has been put in place for you,” he said.

The Comd urged the students to reciprocate the efforts of the alumni members who had invested their time and resources by studying hard to be able to also give back in future.

The Chairman, ADSS Class of 2002 Alumni, Major Ismaila Ajibola, said the project was conceptualised and executed by the Class of 2002 to commemorate their 20th Anniversary since they successfully graduated from the school.

Ajibola said the motive behind the project was borne out of their desire to give back to our Alma-mater which marked the beginning of their journey towards secondary education and consequently, tertiary academic pursuits.

He said that they recognised that their present occupations and endeavours were molded within the four walls of ADSS.

According to him they have the right values, intellectual knowledge and discipline during their stay at ADSS and have continued to nurture these virtues in their individual daily life.

“I must recall that during our days in this school, we enjoyed the best of the learning facilities and our quest to return our school to the good old days where the learning atmosphere was very conducive for all students.

“It is our believe that the edifice, housing the Chemistry lab, will encourage the students to venture into the world of sciences.

“We are all aware that medicines and scientific innovations are now the order of the day wherein the world has become a global village.

“Let me use this opportunity to thank our partners for supporting our course of enhancing formal learning within the military barracks for the benefits of children of serving personnel and its environs,” he said.

Maj AJiboye urged the students to put the chemistry lab to good use while ensuring a high sense of maintenance and called on other ADSS products to emulate the gesture to support improvement of learning conditions in their Alma-mater.

He commended members of the 2002 class for their selfless sacrifices and financial commitment towards the project.

In his remarks, the representative of the Director/Secretary FCT Secondary Education Board, Architect Abubakar Aliyu, lauded the 2002 Alumni for complementing the efforts of Government in the provision of educational facilities in unity schools.

The Principal, Mr Zaki Adama, who was represented by the Vice Principal Academic, Mr Nemngwi Johnson, thanked the 2002 Alumni for the exemplary show of support to the school in different areas.

Mr Adama said the set had been supportive to the school by the zeal to invest into the lives of the younger generation and pledged to ensure optimal utilisation of the laboratory.