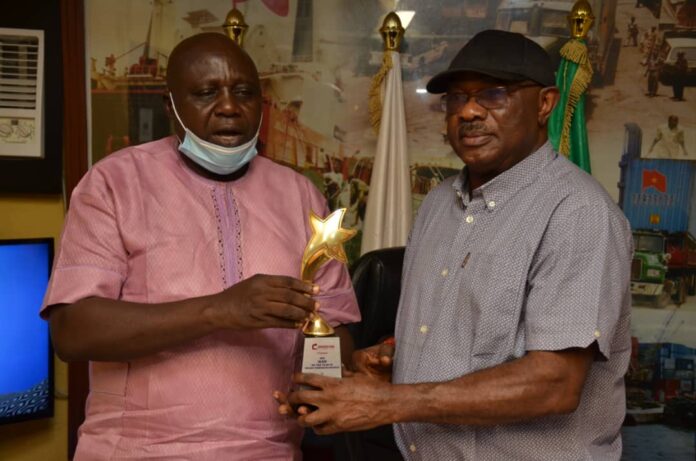 The founder of the National Association of Government Approved Freight Forwarders (NAGAFF), Dr Boniface Aniebonam, has been honoured with an award for “Man of the Year in Freight Forwarding by Cornerstonenewsng.com, an online news platform.

Aniebonam, known for his dexterousness in the handling of the activities of NAGAFF was commended for his principled and passionate ideology in the Freight Forwarders sector which stands him out amongst his counterparts.

In an Award ceremony held at the NAGAFF headquarters in Lagos, Mr. Christopher Oji, presenting the Award to Boniface on behalf of Cornerstone, described the recipient as a man of reputable character whose antecedents has garnered wide commendation and recommendation both within and outside the country.

Oji stated, “We present this award to you for your kindness, for your goodness, philanthropy, and for your contributions to the community and to Nigeria as a whole”.

Receiving the award, Dr. Boniface expressed great appreciation to the organizers of the event and for the honour.

He, however expressed deep dissatisfaction with pace of growth in the maritime sector.

Reminiscing over his three decades of sojourn in the sector, Aniebonam opines the industry is really growing at a discouraging speed and deserves better policies that would reposition it to be able to compete favourably with the best in world.

He says, “I thought that we should have grown beyond what we are now. First, look at the port environment, it doesn’t make any sense. The gateway of the nation’s economy, you cannot access it, yet time is money”. 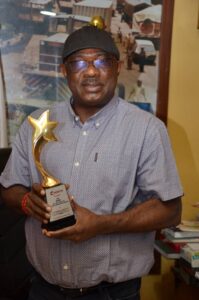 On the newly introduced reduction of duties on imported vehicles, Aniebonam advises the Federal government to put a check to incessant importation of sub-standard or rickety vehicles into the country by rather increasing the import duties on old vehicles to discourage bringing in “junks into Nigeria”.

He stated, “When a car is very old, the rate of duty should be high. In other words, you discourage bringing in junks into Nigeria”.

Speaking further, “you use tariff rate to control the economy, the newer a vehicle is, the lower rate of duty”.

Dr. Aniebonam further expressed his utmost displeasure over the continuous closure of strategic borders in the country describing it as insensitive.

He said, “There is nothing wrong to shut down a border looking at the section 19 of the custom law, and when you have intelligence information, but when you shut down your borders for one year, then something is wrong”.

He calls for intervention from the ECOWAS and advises Nigerian government to address pending issues even with neigbouring countries to facilitate the reopening of the borders.

Writing My Essay – How to Get Started