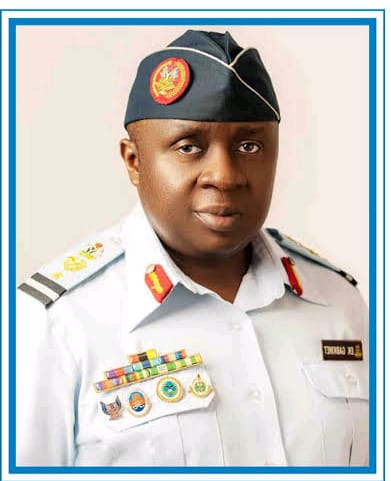 It is not news that Air Commodore Edward Gabkwet represents everything that has to do with Public Relations and image management.

At times, the pressure of being a good man can feel a little much, no matter how much you want to become a good man. The Air Commodore is a good man in all ramifications.

Within my over one year of interfacing with this good man one-star General, my perception about the Airforce had changed. Having sailed far and wide with the navy as a defence correspondent of two decades, I had thought only the Nigerian navy can best be described as the most civilian friendly and peoples armed force, but the humane and open-hearted nature of Air Commodore Gabkwet during his reign as Director Public Relations and Information (DOPRI) triggered more interest in me for the Airforce.

Although strict and principled, he is a passionate soldier, who understands his assignment as the defender of Airforce and does not belittle anyone in trying to do his job. He operated an open-door policy and responded to all enquiries I put across to him promptly and respectfully.

General Gabkwet, like I always call him, has a gift to connect to people, understand them, make them feel special and like they mattered. However, he extremely despised ‘unconstructive’ criticism of the military.

A great writer and reader, the general encouraged me to write a book on my experience on the military beat, which I am putting pen and paper together to actualize. Like a good man that he is, General will always want you to shine.

He is a patient officer and listens to newsmen.

It is my utmost belief that the General would bring his robust PR prowess to bare at the 551 NAF Station, Jos which is his new place of primary assignment.

It is said that if you are brave to say goodbye, life will reward you with new and beautiful hello. I wish my great General and friend a resounding goodluck in his new office. I pray for you to find more opportunities and success along the way of your dreams.

You will be missed sir.