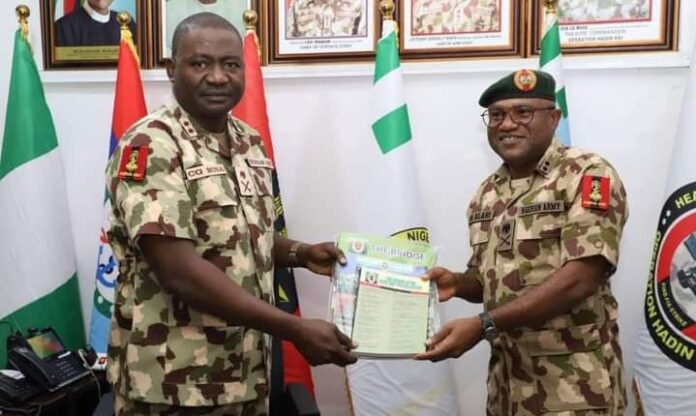 Major General Alabi gave the commendation to the Theatre Commander of Operation HADIN KAI, Major General Christopher Musa who led a delegation of Directors, members of the Faculty and the 2022 participants of Army War College Nigeria Course 6.

He also praised the hybrid forces, Borno State government, civilian components as well as other critical stakeholders in the North East.

The team from the Army War College proceeded to the Theatre Conference Hall where the participants were briefed on the activities of Joint Task Force North East Operation HADIN KAI.

While expressing appreciation for the warm reception accorded the team, Major General Alabi lauded the impressive improvement and efforts of the Theatre Commander and his team in ensuring that peace and normalcy returned to the region.

The Commandant said: “the visit is aimed at exposing participants to the current asymmetric military operations going on in the North East; bearing in mind that knowledge of such operational tactics, techniques, and procedures, as well as challenges, will aid them to develop better strategies in tackling terrorism as future senior commanders in the NA.“

The Theatre Commander, Major General Christopher Musa while addressing the participants urged them to open their minds to learning.

He also assured them that the Theatre remains committed to achieving the set objectives of the National Security Mandate of the President, Commander in Chief of the Armed Forces, President Mohammadu Buhari as well as actualizing the vision of the Service Chiefs.

According to the Theatre Commander, the war against terrorism in the North East would soon come to an end as the federal state