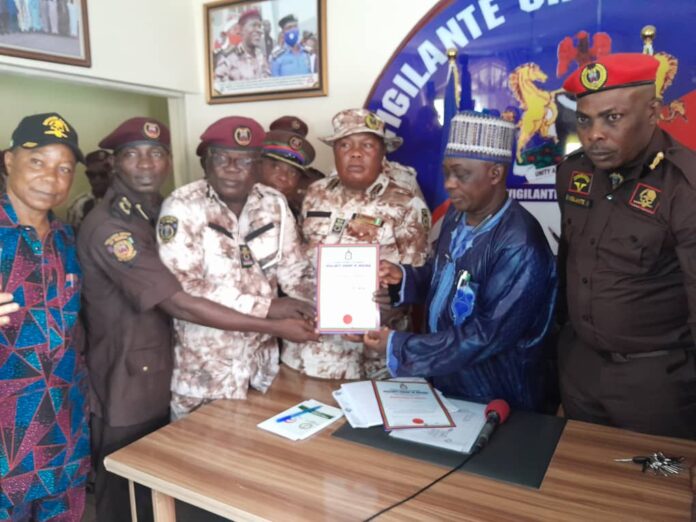 The Vigilante Group of Nigeria (VGN), has said that its men were not among groups banned from bearing arms by the Federal Capital Territory (FCT) Security Committee.

Speaking against the backdrop of a Circular issued by the Security Committee, the Commander General of the VGN, Navy Captain Umar Bakori (rtd), said it is impossible to carry out the task they undertake in remote communities without light arms.

According to him, the arms used by their personnel are light arms duly registered and cleared by their supervising agency, which is the Nigeria Security and Civil Defence Corps (NSCDC).

Capt. Bakori said the VGN is responsible for the security of public schools within the FCT and cannot discharge such huge task without arms.

Following alerts by the US and UK, the FCT Security Committee, had last week introduced a Code of Conduct for vigilance groups operating in the territory, placing a ban on the use of firearms by their members.

In the new Code of Conduct, the Security Committee also prohibited them from carrying out operations without the presence of the police or the express approval of the Divisional Police Officer (DPO), in their respective jurisdictions.

But the Director, of Information and Communication in the FCT, Muhammad Hazat Sule in a statement said, members of the vigilance groups are permitted to possess and use weapons for self-defence or other lawful purposes as allowed by the DPO.

These were some of the decisions reached by the FCT Security Committee at its 11th meeting presided over by the Minister, Federal Capital Territory, Mallam Muhammad Musa Bello, held in Gwarinpa I District, Abuja.

He said, the new approved code required that any member of the group, who recovers a hazardous weapon from a criminal suspect is expected to keep a detailed account and report to the police for further investigation.

“The Committee permitted the vigilante group to make arrests of anyone, who violates the laws of the land as allowed under the Administration of Criminal Justice Act, 2015”.

The VGN has also introduced certification of members to discourage fake operatives from infilterating the organisation.

The group has largely contributed to security and safety across the country.

They have served as informant to police and other security agencies and their actions have helped to check kidnapping, murder, terrorism and other nefarious crimes in the country.