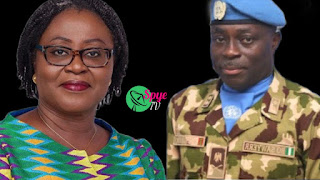 The Assistant Secretary-General of the United Nations for Africa in the Departments of Political and Peacebuilding Affairs and Peace Operations (DPPA-DPO), Martha Ama Pobee, has hailed the Force Commander of the UN Interim Security Force for Abyei (UNISFA) for his untiring efforts as well as those of the women and men under him towards peace in Abyei.

This is just as the UN Assistant Secretary General called on the Security Council to extend the duration of UNISFA for another year to enable the interim force consolidate on the peace building structures it is putting in place.

Mrs Pobee made the disclosures in her remarks to the Security Council of the UN on UNISFA/Abyei operations on Thursday, October 27, 2022.

She said, “Mr President, I would like to end my remarks by thanking Major General Benjamin Sawyerr and the women and men of UNISFA for their tireless work in service of peace in Abyei.

“I would also like to thank Security Council members for their continued support to UNISFA, and seek the Councils support for the Sectetary General’s recommendation to extend the mandate of UNISFA for a period of one year.”