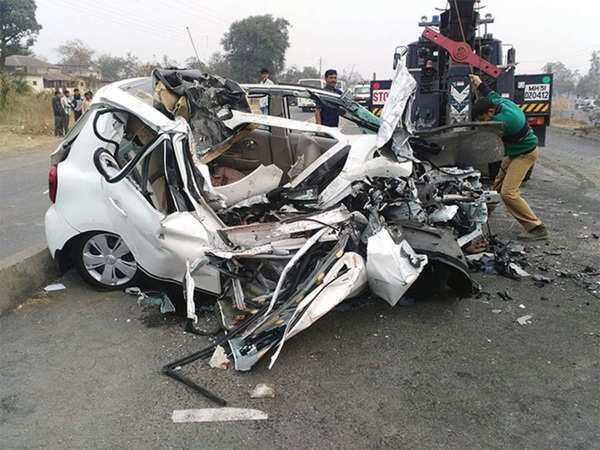 Two persons died while another person was injured yesterday when two buses had a headon collision at the Ilewe Bus Stop, Idimu in Alimosho Local Government Area of Lagos.

A Siena bus loaded with passengers had defied the government shutdown order and was on high speed when it ran into another oncoming bus.

It was gathered that the Siena bus was about to run into a stationary vehicle picking refuse and in an attempt not to run into it, ran into the  government bus used by  Alimosho LGA for enlightenment campaign on  the health implications of Covid-19.

On seeing the fatal nature of the accident, the driver of the refuse vehicle rather than assist in rescueing the trapped occupants of the vehicles  zoomed off, but some angry commercial  drivers and motorcycle operators who suspected that the driver caused the accident, went after him.

In no distance time, the driver was caught by the angry drivers and motorcycle operators who beat him and another man, believed to be one of his workers to stupor. Unconfirmed report claimed that the driver gave up the ghost while the conductor was rushed to the hospital.

However, two occupants of the buses involved in the accident were said to have also died few minutes after they were rushed to a nearby hospital.

An official of the Nigeria Immigration service who was on duty and witnessed the accident was said to have saved the situation as many people would have died in the accident.

According to eyewitness, Wasiu: “When the accident occurred and the driver of the refuse vehicle zoomed off, instead of people to start rescuing those trapped in the accident, they were busy chasing the driver while some were snapping photographs of the accident scene with their phones. It was an Immigration officer, who mobilised people and called some neighborhood watchers who assisted him to break the doors of the buses and rescued the trapped passengers.

“When the injured passengers were rushed to the hospital, two of them died while one is still in critical condition. Anyway, the driver of the vehicle carrying refuse was later arrested and beaten to death. His conductor was rushed to the hospital. But the way he was pummeled, I don’t think he will survive the beating”.

The Immigration officer who spoke on the condition of anonymity as he was not supposed to speak to newsmen, said: “I am miffed with the kind of life people are living in this country. People were asked to stay at home, but they wouldn’t listen. If the Siena bus driver and passengers had stayed at home this avoidable accident wouldn’t have occurred. The occupants of the Local government vehicle were on legitimate duty, carrying out enlightenment campaign, so also were the refuse vehicle driver and his workers. They were picking refuse, where were the Siena bus driver and his passengers going? Again, in this type of situation, there was no police patrol vehicles on the road .If not for the intervention of God, the pandemonium would have escalated, because people were angry and looking for where to vent their anger. Even while I was mobilising people to assist in the rescue operations, they were interested in beating the driver of the refuse truck “.