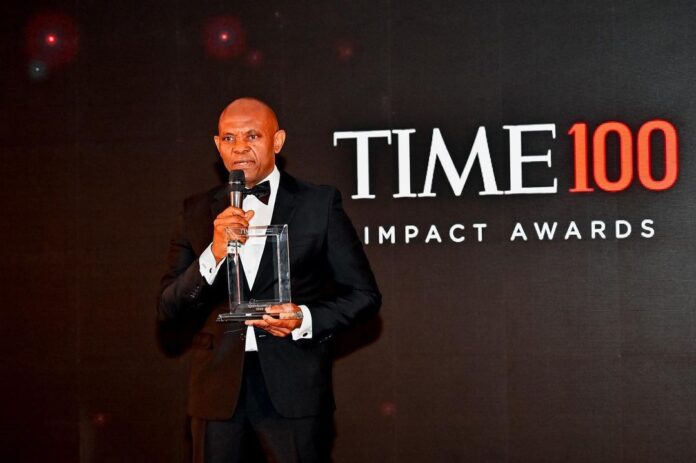 *THE STORY OF A SERIAL ACHIEVER

Like some other Nigerians, the year 2022 was exceptionally good for Dr. Tony Onyemaechi Elumelu, who along with his younger brother; a minority leader in the Nigeria’s House of Representatives, Ndudi Elumelu were among the 447 recipients of Nigeria’s national awards given out on the Independence day by President Muhammadu Buhari. Tony Elumelu was honoured with the Commander, Federal Republic (CFR). It is remarkable that in previous years, he had similarly been honoured with the Commander of the Order of the Niger (CON) and Member of the Order of the Federal Republic (MFR).

Born 22nd March 1963 at Onicha Ukwu, in Aniocha North Local Government Area of Delta State, Elumelu is an African economist, entrepreneur, and philanthropist. He is the Chairman of Heirs Holdings, the United Bank for Africa, Transcorp and founder of The Tony Elumelu Foundation. He ranks amongst the wealthiest Nigerians in the 21st Century, yet his richness did not come by happenstance as he has worked assiduously and moved from one stake of the ladder to the other over the years paying the price as it were. With a Bachelor’s degree in Economics from Ambrose Alli University, Edo State and a Master of Science degree also in Economics from the University of Lagos, he had prepared himself adequately for the corporate world.

He started his career in Union Bank as a Youth Corp member of the National Youth Service Corps in 1985. Earlier in his banking career, Elumelu worked hard in contributing to the fortunes that helped to reverse the floundering status of a commercial bank in Lagos. He came into limelight in 1997 after he led a group of small investors to take over the bank which eventually culminated in the emergence of Standard Trust Bank (STB) that later became a top player in Nigeria’s banking industry. This achievement of STB facilitated its efficient merger in 2005 with the United Bank for Africa (UBA) following which Elumelu automatically became the Chief Executive Officer of the new UBA.

Following his retirement from UBA in 2010, Elumelu as a strategic investor took a controlling interest in Transcorp; a publicly traded Nigerian conglomerate with diversification in agriculture, power generation, oil production and hospitality. He also founded Heirs Holdings, which invests in the financial services, energy, real estate and hospitality, agribusiness, and healthcare sectors. In the same year, he established the Tony Elumelu Foundation(TEF), an Africa-based and African-funded philanthropic organisation.

With a philosophy that centres on what is described as Africapitalism which is a belief that the private sector is a key enabler of economic and social wealth creation, Elumelu takes pride in advancing the frontiers of entrepreneurship in Africa. Africapitalism positions Africa’s private sector and most importantly entrepreneurs as the catalyst for the social and economic development of the continent.

It is interesting to note that there is already a multiplier effect in the philanthropic initiative of Tony Elumelu through his Foundation as beneficiaries are reportedly leading trailblazing businesses in the various communities, creating jobs and exporting local African products to the global market. Just recently on December 5, 2022 the next batch of beneficiaries was announced with 56% of them being women.

As a highly dynamic, versatile and upwardly mobile personality, Elumelu serves as an advisor to the USAID’s Private Capital Group for Africa (PCGA) Partners Forum. He sits on the Nigerian President’s Agricultural Transformation Implementation Council (ATIC). He is also vice-chairman of the National Competitiveness Council of Nigeria (NCCN) which formation he was a key driver in, and serves as Co-Chair of the Aspen Institute Dialogue Series on Global Food Security.

He additionally chairs the Ministerial Committee to establish world-class hospitals and diagnostic centres across Nigeria, at the invitation of the Federal Government and the Presidential Jobs Board, engineered to create three million jobs in one year. He also serves as a member of the Global Advisory Board of the United Nations Sustainable Energy for All Initiative (SE4ALL) and USAID’s Private Capital Group for Africa Partners Forum. He was one of the co-chairs of the 26th World Economic Forum on Africa in Kigali, Rwanda, from 11 to 13 May 2016. Elumelu is included in Time Magazine ‘s 100 Most Influential People of 2020.

Over the years, he has been recognized and honoured by several organizations, institutions among which are some universities. He has honorary doctorate degrees from Benue State University, Makurdi and the University of Nigeria, Nsukka (UNN). In 2008 he was honoured as African banker of the year by African Banker magazine and African Business leader of the year by Africa Investor magazine same year. In 2012 the Forbes Magazine recognized him as one of Africa’s 20 most powerful people just as he was in same year recognized as one of the 100 Most Influential Africans in Business by New African Magazine. In 2013 he bagged the Leadership Award in Business and Philanthropy from the AAI and was chosen as ESI Most influential Figure in African Power in 2015. In the same 2015 Tony Elumelu was ranked 31st with a net-worth of $700m on Forbes Africa’s richest list. In 2016 he was honoured with CGECI Academy’s Lifetime Achievement Award.

With many of his mentees doing well in the banking industry and corporate world generally, Tony Onyemaechi Elumelu has continued to be a reference point as a huge success in human and material resources management. He is undoubtedly a blessing to the present and future generation of Nigerians, nay Africans entrepreneurs.