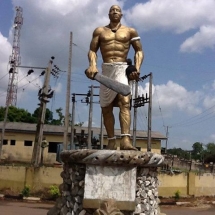 The Fulani herdsmen, Sunday Vanguard gathered stormed the church at about 8:30 pm when the deceased was praying and counselling five of his members in the front church hall.

The deceased who was transferred from Calabar February last year, according to sources, had a wife and five children.

Most Supreme Evangelist Isaiah George of the Archdioceses of Ughelli 1, who came in from Ughelli on getting the information, told Sunday Vanguard that the hoodlums numbering two after a failed attempt to break into the house, forced the window of the room opened and shot the deceased severally through the window.

He said the wife had to take cover in the kitchen while the shooting was going on.

He said the late Stephen Akpor, who was in his mid-50s, hailed from Orogun in Ughelli North local government area of the state.

Also speaking with Sunday Vanguard, a member of the church, Mr Temitope who gave a detailed account of what happened, said: “We were here in the church premises with the Prophet and some church members, when suddenly two Fulani men came with rifles and ordered us to lie down, then our pastor got up and went into his room.

“They beckoned on him to come back but he ignored them. At that point, those of us lying down were matched into the bush and they ordered us to remove our garments and lie facing down.