It is usually interesting when a company awards a police officer for an outstanding performance. That was exactly what happened when SP Julian Wealth Igbudu, a Superintendent of Police who is serving as Commander, IGP Special Tactical Squad in Akwa Ibom, Cross River and Ebonyi States, bagged an Executive Excellence Performance Award, recently in Lagos. 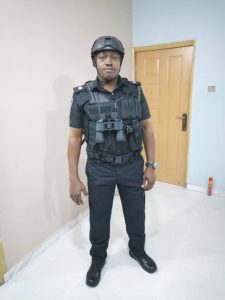 The name Julian is synonymous with hard work and achievements judging from the records he has set for himself wherever he is called to serve.
He is best at handling serious cases ranging from armed robbery, kidnappings and other high profile crimes. He derives pleasure from bursting and cracking such criminal activities effortlessly.
The award organised by Harlem Global Awards (USA) in partnership with Our Heritage International and held at Golden Tulip Hotel, had Julian as one of the awards recipients.
Other awardees were Akparawa Ephraim Inyangeyen – Commissioner for Works, Akwa Ibom State, Mr Jay Ogor, Hon. Joseph Godwin, Rt. Hon. Dr. Collins Chino, Akparawa (Obong) Patrick Edwin Udofia and HRM Eze Barr. Justice Ezeala.
Tagged, 2020 Executive Excellence Performance Award, the Red Carpet was anchored by Miss Rita Dominic Michael of News Express Nigeria TV fame, who also read all the citations with her angelic voice. The award ceremony is an annual event aimed at celebrating outstanding leaders in our society.
Though all the awardees had excellent citations, that of Supol Julian stood out because of the unusual strides he takes in performing his duties diligently, as a police officer in protecting lives and property.
Speaking with Maggie’s Blog exclusively, the super cop said: “My driving force is my passion for the job and the only thing that can impact my world is to do what is expected of me to do as a police officer.”
Continuing, he said: “What has happened to me today (Award day) has given me the encouragement to do better than I had done before.”

He prayed that the organisers of the awards ceremony will continue to do better every year.
Justifying the nomination of SP Julian Wealth Igbudu as one of the awardees, Princess Goodness James, spokesperson of the organisers, noted that what made her company to nominate him was Julian’s resilience in his duty in the area of arrests of armed robbers and kidnappers while setting their victims free in his area of operation.
Julian Igbudu is an indigene of Bekawarra Local Government Area of Cross River State. He obtained a BSC in Marketing from the University of Calabar (Unical), and MSC in Public Order from University of Uyo (Uniuyo). He later proceeded to The Nigeria Police Academy, Kano. He has worked in various capacities in different police commands, namely, Lagos State; Police Mobile Force, Calabar; Area Crime Officer, Divisional Police Officer, Officer in Charge of anti robbery, State Criminal Investigation Department, Uyo; and anti kidnapping, Kogi State Command.
Currently, he is the Commander, IGP’s Special Tactical Squad, in charge of Akwa Ibom and Cross River states.
According to Julian, he derives fulfillment from cracking hardcore cases. He has busted several robbery gangs and has arrested kidnappers while rescuing their victims.