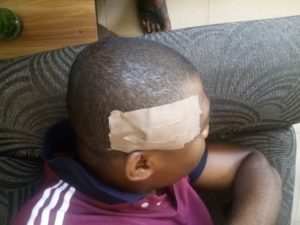 The spokesman of the Command, Mr. Abdullahi Maiwada, disclosed this to newsmen.

He said that the un-repentant smugglers violently attacked the officers while on official duty.

According to him, “At 2.13pm of Sunday, April 5, 2020, officers and men of Nigeria Customs Service, Ogun-1 Command went on information patrol to Anigbobo village in Obada Local Government Area, Ogun state.

“They succeeded in Intercepting 35 bags of smuggled rice of 50kg each. On their way out of the area of arrest, some unscrupulous elements suspected to be die-hard smugglers in their numbers shot sporadically at Officers.

“Eventually, one Inspectors of Customs, EI Edeh was shot on his forehead. The injured officer was immediately rushed to hospital for proper medical attention and is currently responding to treatment.”

He added: “Consequently, the team gallantly responded to the aggression and succeeded in evacuating the afore-mentioned items to Government Warehouse for safe keeping.

“Also, investigation is on-going to track the perpetrators of this barbaric act.

“To this end, the Customs Area Controller, Comptroller Agbara Michael, assured members of the public that the renewed hostilities by armed smugglers would not deter the Officers and Men of the Command from discharging their statutory responsibilities.

“He further assured law abiding members of the public to go about their legitimate activities, that no matter the antics deployed by smugglers, they will surely meet their waterloo”.