There may be more trouble for the distressed residents of Soba, Abule -Ado in Lagos, as the Federal Government has initiated plans to take over the area affected by Sunday’s explosion. 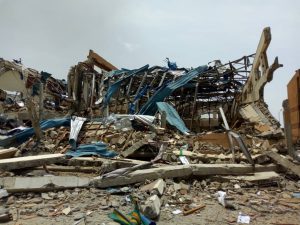 This disclosure was made by the acting Managing Director/ Chief Executive Officer, (MD/CEO) of Federal Housing Authority (FHA), Umar Saliu Buntu, who visited the site of the explosion on yesterday.

According to Buntu, the Federal Government had acquired the large expanse of land from Ojo Barracks to Trade Fair, including the Soba axis, since the1970’s

The FHA boss who commiserated with affected person, however noted that many of the building in the area had encroached into the government acquired land, making them illegal occupants.

He said, “The Amuwo-Odofin residents are claiming ownership while the government has acquired this land for a long time. The land spread to the Ojo Cantonment up to the Trade Fair but over time, the family were still selling to unsuspecting members of the public.

“Most of the land owners here did not buy from FHA and if they did, let them bring the title they have. They don’t have any title with us, we are not aware, all along that we have been coming here, the place kept expanding and the family kept selling to unsuspecting members of the public and they don’t have anything to show for it. ”

Reacting to the claim of the FHA Chairman, the Baale of Soba, Chief Raheem Agbebeji, maintained the affected portion of Soba is a family property and not government owned.

The Baale who spoke through the family Secretary, Alhaji Umaru, said: “ Soba is not an illegal community. We were formally in trade fair complex, but when the federal government came with trade fair complex, they shifted us here, which was part of our farmland we inherited from our four fathers.

“The government compensated us for having to destroy our farm lands at Soba, to build houses, after moving us. They did not compensate us to taking our land but for our crops that were destroyed. The truth remains that Soba town has been in existence for over 300 years and we have it in the government archives. We own even down to barrack and Volks. We have common boundary with Amuwo -Odofin.

“There is a barricade by NNPC, that is the boundary that we cannot cross and we did not cross. They said we should not cross the barricade. Last month, the army and NNPC even cleared makeshift houses and containers around that area.”

On their part, the Landlords of Soba said they had legal documents backing their stay in the community.

Addressing newsmen yesterday, the Chairman of Landlords/Residents  Association of Soba, Chief Gani Adams said they had been communicating with FHA to finalise the process of getting their certificate of occupancy, before the tragic incident.

The Chairman who was represented by Mr. Chime Umadim said: “ Some of us have been here for over two or three decades, and we have meet FHA on several occasion. They have our master plan and survey plan, and they know we are leaving here.

“ We are not aliens and we have been working hand in hand with them. We are not illegal occupants. Our documents are intact. They even delineated this place to us.  They know we are here.”

Speaking of the suspected chase of the explosion, the association faulted the Nigerian National Petroleum Corporation (NNPC), saying the explosion was a bomb blast.

According to the Chairman: “ Contrary to the submission of the Group Managing Director of the NNPC,  Mr. Mele Kyari, that the blast was caused by some gas depots close to the pipelin right of way, an information that is totally false, with deliberate calculation to suppress the facr of ehat acrualkycausedtbe blast, which we suspect and are very convinced that it was a bomb detonated on the pipeline which caused the unprecedented blast and damage to lives and properties.

The Landlords/Resident Association called on the Federal and State Government to set up a high power fact-finding committee to unravel the immediate and remote causes of the explosion, which they described as a national disaster.

They said this fact-finding would also help to prevent the reoccurrence of such wanton destructions of lives and properties in Lagos and Nigeria in general.

“ It is indeed very unfortunate that we lost our BoT chairman, wife, children and over 30 others. We need help from the government to put our lives together. ”

An affected landlord, Chief Emmanuel Ume, who said he lost two duplex, a luxury hair saloon, a sewing factory, all worth over N130 million,  advised the Federal Government to thread with caution as a take over of the affected are may do more harm to victims.

Narrating how he escaped death, Ume said : “ I had gone to church with my family that Sunday morning and that was what saved me. When we got back, we discovered we had lost everything.  What I and my family are left with is the clothes we wore to church. We want the government to come to our aid.

“ I am highly disappointed with the people from FHA with the statement they are making. We have an agreement with them and we are not just here illegally. I met the former Baale who is now late and he gave me papers that they ceded some lands to him and after which the FHA said he had overshot his boundary, but he had documents from FHA.

“ We have all our survey plan and documents, So we are surprised they trying to deny us. We have had issues of pipeline explosion and just last year NNPC had come to put their demarcation. We observed the 40 metre government said we should give from the pipeline. People that have been vandalising the pipeline before have been caught.

“ We have been in good relationship with the government and now that we have problem, government should come to our aid, not to take what we have. Personally I lost property worth over N130 million, I lost two duplex, fully furnished. I had a saloon for my wife there, fully equipped, I had sewing factory, fully equipped and all got burnt. We don’t need persecution, we need assistance, government should not come to persecute us. We are all  members of the All Progressive Congress,  and we support the government why should they come now to take what belongs to us, because what FHA wants. to do is to capitalize on what has happened to take what belongs to us. ”