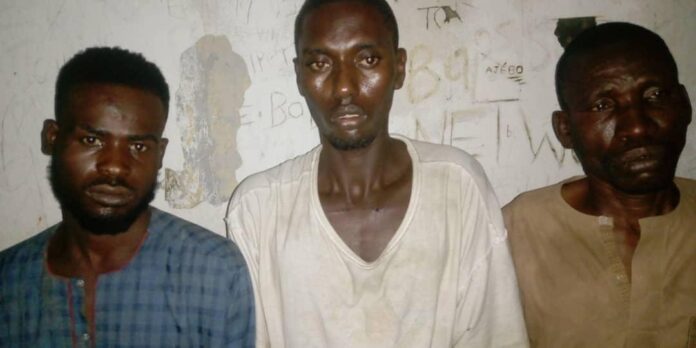 Operatives of the Federal Capital Territory Police Command have arrested a gang of hoodlums who robbed an Abuja residence along Old Gwarimpa Road in the early hours of Saturday.

The suspects, Shetima Abubakar, Yakubu Iliya and Haruna Amadu, are now in the net of the FCT police command.

The operatives also recovered a Mercedes Benz GLK 350 Ash Colour with REG. NO. GWA 740 FM, reportedly snatched by the dreaded gang, laptop computers, mobile phones, and other valuables stolen from the victims.

In a statement by the FCT Police Public Relations Officer, DSP Josephine Adeh, the FCT Police Commissioner, Babaji Sunday was quoted as saying: “Following a prompt distress call of criminal invasion and armed robbery, received by the Federal Capital Territory (FCT) Police Command in the early house of Saturday, September 24, 2022, Police operatives have arrested three members of the criminal gang who perpetrated the crime. The operatives also recovered a Mercedes Benz GLK 350 Ash Colour with REG. NO. GWA 740 FM, Laptop Computers, Mobile Phones, and other valuables stolen from the victims.

“Preliminary investigations indicate that hoodlums numbering about ten (10) invaded residences along the Old Gwarinpa road and robbed victims of their valuables including a Mercedes Benz car, gadgets and other valuables. On receipt of the distress call at about 0400hrs (4 am) same date, Police operatives from both Gwarinpa and Life camp Divisions were drafted to the area. The hoodlums however fled the scene on the arrival of the Police teams.

“The Police teams with the coordination of the Command Control Room trailed the fleeing suspects. The surveillance team from Maitama Division were equally mobilised and the vehicle was intercepted at Amingo Wuse 2 area of the FCT. Three (3) suspects namely Shetima Abubakar ‘m’ 22yrs, Yakubu Iliya ‘m’ 22yrs and Haruna Amadu ‘m’ 54yrs, were arrested while the stolen Mercedes Benz GLK 350 and other valuables were recovered.

“The suspects are being interrogated and efforts intensified to arrest other members of the syndicate still at large. All the suspects would be arraigned in court on completion of investigations.” He stated.

Babaji commended residents for the prompt information on the robbery and assured them that crimes when detected would be promptly confronted.