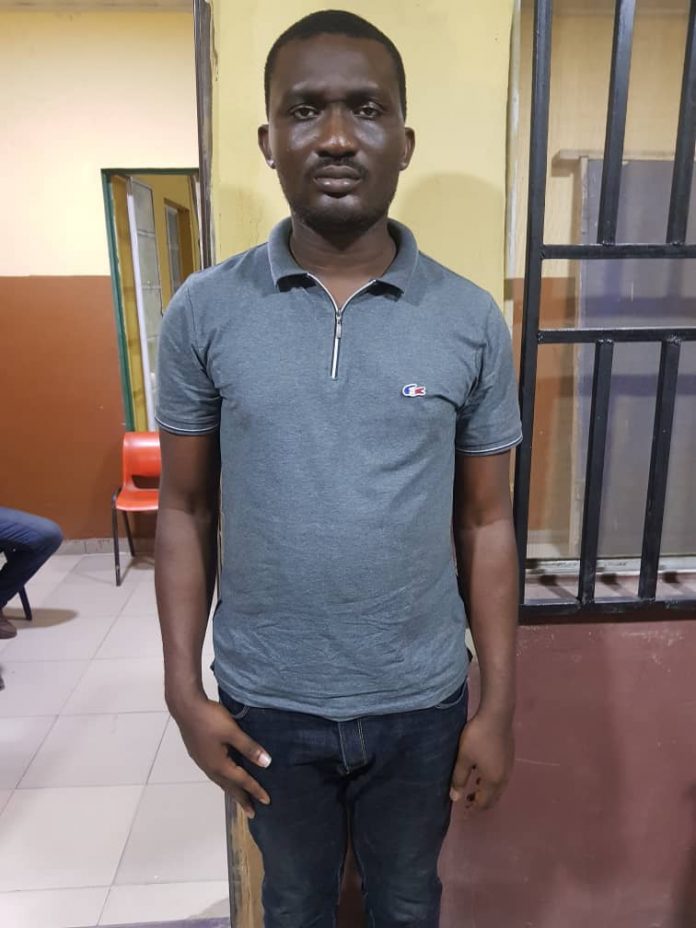 The suspect, 32-year-old Seye Onigbinde who studied Economics at the Obafemi Awolowo university has rendered over 200 Nigerians broke following his proposal to double their return on investment monthly through forex deals.

According to the suspect, his victims began to trust him after he fulfilled his promise on his first set of investors.

The victims who made huge profits had introduced other gullible Nigerians to him. At this point, Onigbinde who operated for about 3years with no registered office address and license and without being detected by law enforcement agents swindled his “clients” and permanently switched off his phone.

He was however tracked and arrested by detectives led by the Area Commander Area ‘F’, ACP Akinbayo Olasoji through his wife who had threatened to run to America with their only child when she noticed illegal dealings by her husband.

Detectives had tracked his wife’s phone number after several petitions from his victims who approached police operatives to seek justice.

Onigbinde told newsmen that he regrets his actions.

According to him, ” I collect money from people for forex trading. I have been in the business since 2017 but my wife got to know the deals i am into towards the end of last year.When she discovered, she warned me not to collect money from Nigerians. She advised i could convince family members to invest but she never knew I have gone far into it.

” I graduated and had my NYSC with Gtbank. I have been married for over 2years now. I collected the money from my clients to invest in forex, but the business went bad and i lost the money. I am oweing many of my clients about N234million and i promise to pay back in 1year.

” Altgough i have been operating without license from Securities and Exchange Commission (SEC) and CBN but i was planning to clean up and go legitimate soon before I was arrested.

“I have 5 accounts in Gtbank which i use in perpetrating my deals. I don’t have an office to avoid being traced but i use my brother’s office in Alaagomeji, Yaba.

” My biggest pain now is that my wife is angry at me right now. She reported me to family members and threatened to run away before i was arrested. She was also arrested and allowed to go. She was arrested because i forged her signature in some of the document without her knowledge.

“Although i have apologised but apology is not a enough for the damage i have caused.”

Authorities in Lagos State police command yesterday urged more victims of Onigbinde who are not aware of his arrest to come forth and assist them in their investigation in their bid to serve justice.

According to them, the suspect would be charged to court for Fraud, Obtaining of money under false pretence and money laundering.