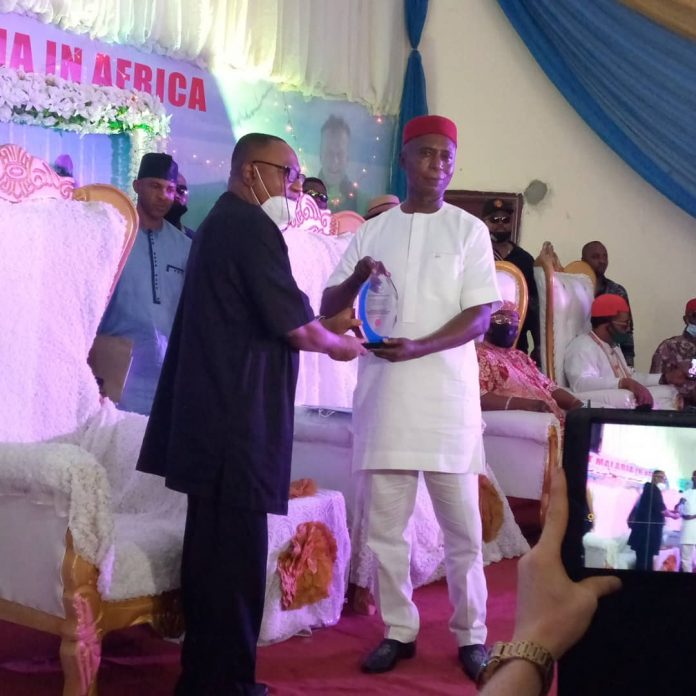 It was a day that will in a long time remain indelible in the memoirs of the creme-de-la-creme of the academic citadel, who converged at the 750 Lecture Theatre at Site 3 Campus of the Institution to honour the man behind the Paris Club Loan Refund to Nigeria and now Initiator of the Global Campaign Against Malaria in Africa.

The ovation was loud and the award recipient didn’t take it for granted as he benevolently donated N20 million to the Department of Mass Communication, the organisers of the award programme to aid their Accreditation of the seven new courses under Mass Communication as part of its unbundling effort.

Ned Nwoko in his elated state, further responded to the honour by explaining how he loved his State of his birth – Delta.

He said he doesn’t like long speeches; however, he took time to touch on some critical aspects of his activities, especially the Malaria Eradication Project in Africa and Nigeria in particular, assuring that the project would succeed.

According to him, “When I started thinking about the project, I felt there was a problem and that problem needed to be solved by Africans. Why is it that for centuries there has not been a vaccine for Malaria?

“Malaria is Africa’s problem, and we must look for African solution to it. That was what prompted me into the search for solution and I started by considering two major options – Research and the need to holistically clean up Nigeria. The clean up will involve everybody in Nigeria, there will be a recycling plant in every LGA to enable for the sorting of refuse. The youths should get ready because this will create over three million jobs.

“Malaria kills over five hundred thousand people annually. We have not found vaccine for it in centuries, yet the world is locked down in search for vaccine to Covid-19 that is still less than one year. Malaria causing mosquitoes are bred from dirts, and that is why clean up is necessary. There will be a new regime of discipline and a new attitude of cleanliness from next year, when all Nigerians will be called upon to clean up Nigeria.

” It is my pleasure to inform you that the research for Malaria vaccine is expensive but I have the capacity to bear the cost from my foundation – Ned Nwoko Foundation. I want to also announce to you that as part of my expedition to the Antarctica, I discovered the people that will help us fumigate Nigeria. We are as a matter of policy collaborating with the Federal, State and Local Governments”, Nwoko affirmed.

Still basking in the euphoria of the award, the Founder of the STARS University, graciously extended a Research Centre to Delta State University, to join his team of researchers for Malaria Eradication Vaccine.

He described the Distinguished Service Award as inspiring, adding that “Every honour of this nature inspires me to do more. Life without humanity is nothing. So, whatever I do is ordained to help advance the course of humanity”, Nwoko concluded.

Meanwhile, the Vice Chancellor of the University, Prof. Andy Ogorchukwu Egwunyenga, who equally said he was honoured to witness such a lifetime historic honour on Ned Nwoko for his outstanding performances in life, revealed he didn’t hesitate to approve the proposal for the honour when it was brought before him.

“Hon. Prince Ned Nwoko is a Star of the Nigerian people. I need no convincing that he is someone whose activities focus on the best values.

“He has a noble idea worth encouraging. To fight Malaria scourge in the whole of Africa is no joke. For this singular reason, we had to honour him to give him strength for the tasking journey.

“As part of our effort in the University, we have one of our own, Dr. Ojianwuna who was selected as a Project Director to represent the WHO/Federal Ministry of Health’s Mosquitoes Control Centre in South-South Geopolitical Zone. However, it would be a privilege for us to key into your programme to support your Malaria Eradication mechanism in Nigeria and Africa”, the Vice Chancellor posited.

Moreover, the woman behind the driving process for the University’s honour of Prince Ned Nwoko, Dr. Joyce Ogwezi mesmerized her audience with her intelligence as she gave a brief history of the Mass Communication Department.

She said the Department was established in 1992 with her as the pioneer HOD, and having worked in the Institution for about 28 years, she was reappointed to Head the Department.

Ogwezi maintained that the Department of Mass Communication had been designing programmes geared towards positioning her students to become outstanding leaders in the media industry and beyond.

She affirmed that part of such excellent programmes propelled the University to key into the unbundling of Mass Communication Department into seven distinct degree programmes.

She appealed that for NUC to give full Accreditation to Mass Communication as a full fledged Faculty with those degree programmes in the University, she needed N98 million for the processes.

The cerebral HOD eulogized Prince Ned Nwoko for accepting the University’s honour, saying it would be a thing of joy if the Faculty was named after him.

Nonetheless, participants at the ceremony had praised the organisers for proper event management with the University’s Secondary School entertaining guests with cultural dances.

Present at the occasion were eminent academia both from within and outside the University, revered Royal Fathers from Anioma, Government functionaries, captains of industry and others too numerous to mention.