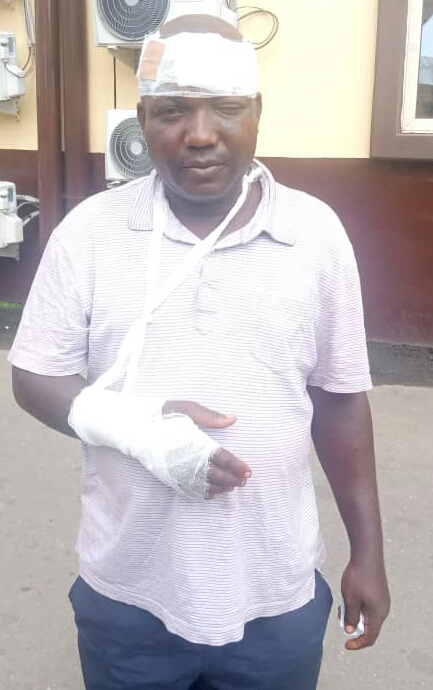 Motorcyce operators popularly called ‘okada’ riders and officers of the Lagos State Taskforce on Tuesday clashed at Second Rainbow area of Mile 2 during a raid by the agency. 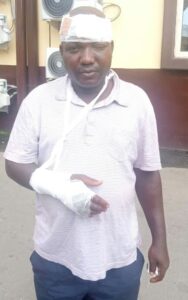 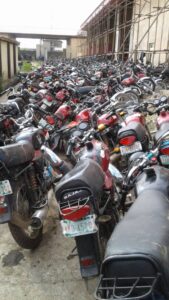 Trouble started when officials of the Taskforce stormed the area in the morning and seized over 200 motorcycles according to Mr. Joshua Emmanuel, Chairman, Amalgamated Commercial Motorcycle Riders Association of Nigeria (ACOMORAN), Second Rainbow branch, Mile 2.

Emmanuel said that most of the riders in that axis were from the north and had come to Lagos to hustle legitimately to feed their families.

“The Taskforce came with hoodlums in their vans brandishing cutlasses and they have killed three of our people just because we are legitimately making a living in the city,” he said.

“This is not fair, we are all Nigerians. Some of us have families in our villages that we travel home to every December.

Please we just want them to return our bikes to us because they have been cheating us for a very long time now,” he said.

Abass Muritala, Treasurer of the association said that the LagosTaskforce mainly aimed at impounding brand new motorcycles and left the old and rickety ones alone. Now that we are trying to make a honest living, you people are making life miserable for us. Please, we urge you to return our bikes to us because we can not turn to armed robbery,” Muritala said.

Lawal Gida, one of the riders said that three of his motorcycles had been seized in the past and whenever he went to claim them at the agency’s office, he would not meet them there again.

“I have been to the Taskforce office on many occasion to claim my seized bikes but anytime I get there, I will not find my bike there again.

Gida said that the government should provide jobs for the seemingly poor populace if they do not want them riding motorcycles in the city again.

John Tumba, a graduate from Adamawa State University said that he was highly disappointed with the way they were7 being treated just because they were trying to make a honest living.

Tumba said that nothing had been done to go after Boko Haram, Fulani herdsmen, armed robbers and kidnappers who were operating with impunity in the northern part of the country.

“It is innocent citizens trying to make a honest livelihood that they would be oppressing and this is unfair. Lagos Taskforce have seized three of my bikes this year alone. Am I working for them to be seizing my bikes and auctioning it at meager amounts whenever they feel like.

“After graduating with no work, and trying to get work for ourselves, we are still being oppressed by the government. This is a crime against humanity,” he said.

Tumba said that he was able to complete his higher education through the money he made riding okada in Lagos State.

“A lot of my people provide for their families through the money made from okada riding.

“It is like the government is encouraging us to go back home to join terrorist groups and aid them in unleashing mayhem across the country,” he said.

Meanwhile, Head Public Affairs Unit, Lagos State Taskforce, Adebayo Taofik said that the agency carried out the operation based on series of complaints against their excesses from the public.

Adebayo said that people complained about activities of the Okada riders using their bikes to rob them of their valuables and plying restricted routes as well.

“After impounding about 74 Okadas caught plying one-way and those operating on highway, Okada riders mobilised themselves and attacked officers of the Agency.

“They damaged beyond repair two of our vehicles with one of our truck.

“A Paramilitary officer attached to the Agency (Ganiyu Mustspha) was wounded with broken bottles and Cutlass because he mistakenly ran into the mob,” he said.

Adebayo said that since the EndSARS protest, every motorists including Okada riders operates with impunity thereby causing serious traffic gridlock across the State.

“We had a stakeholders meeting with their Okada  leaders and they made us to understand that those flagrantly disobeying the laws were not responsible to any associations in Lagos.

“We must all join hands together to salvage the State from the hands of these notorious criminals who use Okada to perpetuate evil to the public,” Adebayo said.ent from Yahoo Mail on Android

Insecurity: FCT police command warns against illegal use of drones

Intelligence on movement of bandits through Kebbi to Kwara fake, say police