The issue of constitutional immunity is in the news again major for sole reasons the Vice President of the Federal Republic of Nigeria, Prof. Yemi Osinbajo SAN, said that he may lay down his immunity; and the question has been asked whether the Vice President can lay down the immunity provided for his benefit by the Constitution.

I therefore take the liberty to comment on whether the Vice President can waive his immunity vis-à-vis the provisions of section 308 of the Constitution of the Federal Republic of Nigeria 1999 (as amended).

Notwithstanding anything to the contrary in this Constitution, but subject to subsection (2) of this section:

Provided that in ascertaining whether any period of limitation has expired for the purposes of any proceedings against a person to whom this section applies, no account shall be taken of his period of office.

(3) This section applies to a person holding the office of President or Vice-President, Governor or Deputy Governor; and the reference in this section to “period of office” is a reference to the period during which the person holding such office is required to perform the functions of the office.

This position further found backing in the use of the word “shall” as the operative word in the section which word admit of no discretion whatsoever. The Nigerian courts have further reiterate this position in a number cases. For example, in Tinubu v. IMB Securities Plc, the Court of Appeal took the view that a person to whom section 308 applies could not even as an appellant pursue an appeal before this Court during the period of his office. The court took the view that a plaintiff to whom section 308 did not directly apply could not initiate or continue proceedings against a person to whom section 308 applies. The latter person could not pursue an appeal against any decision of the trial court. The reason being that, to allow that person was akin to a continuation of the proceedings before the lower court, the Supreme Court in upholding the reasoning of Court of Appeal said per Iguh JSC:

In my view, the Immunity granted to the incumbent of the relevant office under section 308 (1) (a) of the Constitution prescribes an absolute prohibition on the courts from entertaining any proceedings, civil or criminal, in respect of any claim or relief against a person to whom that section of the Constitution applies during the period he holds office. No question of waiver of the relevant immunity by the incumbent of the office concerned or indeed, by the courts may therefore arise. In my view, the Court of Appeal declined to entertain the appellant’s appeal pending before it as to do otherwise would amount to continuing the plaintiff/ respondent’s suit against the defendant/appellant, a suit which under section 308 (1)(a) of the 1999 Constitution shall not be continued against the appellant while he remained Governor of Lagos State.

Further in Industrial Commercial Service Ltd v. Balton, the Court of Appeal held that no question of waiver of the relevant immunity by the incumbent of the offices concerned, or indeed by the courts may arise; it is an absolute bar. Even where the incumbent fails to rely on the immunity clause the court will still decline jurisdiction to entertain the case. Hence in Rotimi & Ors v. Macgregor, an action for damages for trespass committed by the defendants against the plaintiff was brought before the court. While the action was pending the first defendant became the Military Governor of Western State. The provision of section 161(1)(c) of the 1963 Constitution applied and the action should have been struck out against him. The Supreme Court held that section 161(1)(c) of the Constitution prescribes immunity from court process, and the incumbent of the relevant office cannot waive the effect of the section, so that even if it was not relied on before the court, the court is bound to give effect to it.

It is worthy of mention at this junction that the immunity clause is of great antiquity in Nigeria’s nascent constitutional law jurisprudence. The vestiges of the doctrine of immunity in favour of the occupier of these offices have always been a consistent feature of each successive constitutions of Nigeria.

Without disregarding the argument that the immunity clause provided in 308(3) of the Constitution have further incentivized the occupiers of these offices in the commission of civil wrongs or crime. For instance, by the provision of the immunity clause, it is almost impossible to hold any case against an incumbent, even if he openly commits an offence. Hence, they are immune to prosecution for any type of offence while their tenure last. That is why some Governors were alleged to have indulged in carefree looting of their state treasury. Some Governors have allegedly been involved in the murder of political opponents while some have been arrested abroad for money laundering and other criminal activities.

Furthermore, the intervening period before the commencement of the of the civil or criminal proceedings against the President, Vice-President, Governor or Deputy Governor, will create an opportunity for a criminally-minded executive to destroy the evidence and make it almost impossible for the law to take its due course.

However, the immunity clause is not absolute as the law provides some exceptions. Some of the exceptions are: (1) where the incumbent is a nominal party in a suit and suits against official acts. In Abacha v. Fawehinmi, the Supreme Court held per Uwaifo JSC that the immunity provided for does not apply to [the] person in question in his official capacity or to a civil or criminal proceeding in which such a person is only a nominal party; (2) Police investigations – Section 308 of the 1999 Constitution does not immune the officials stipulated in its subsection (3) from police investigation. This is because investigation of a crime by the police is a preliminary course, which may or may not result in a criminal prosecution; (3) Election petitions; (4) Acts Done Outside Nigeria – The immunity granted certain officials under section 308 of the 1999 Constitution does not cover acts done by these officials outside the country. This was why the former Governor of Bayelsa State (Governor Alamieyeseigha) was arrested in Britain while he was still the Governor of Bayelsa State for money laundering. A discussion of the case will now be carried out.

Flowing from the foregoing position of the law, the immunity cannot be waived by the holder or the person whom the constitution conferred it on. This is because the constitution envisages a situation which admits of non distraction whatsoever for the holder of such position. However this is no to say that the person cannot be prosecuted or any other civil proceedings commenced against the person. In fact the constitution provided for the procedure for impeachment and after impeachment, the proceedings property may be commenced and the statute of limited cannot apply to such person.

In closing and in particular reference to the decision of the Vice President to waive his immunity, in as much as I will like to commend that position is unprecedented in our democracy, unless the constitution is amended and an express waiver is permitted or provided therein, the VP cannot constitutionally waive his immunity. Any waiver of the immunity of the VP is unconstitutional, illegal null and void and of no effect whatsoever.

May I further add by way of closing remarks, that the only option available to the VP in his bid to waive his immunity is to resign and I don’t think this country is tired of the services of such an honourable man as the VIce President of the Federal Republic of Nigeria.

EXCLUSIVE: The challenges of combating crime through effective community policing 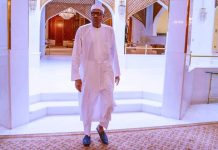 Perspectives on the Renaming of the Senate Building of the Adekunle Ajasin University Akungba-Akoko After Former Governor Olusegun Mimiko by Governor Rotimi Akeredolu...

The Deplorable State of Federal Roads : Excising Ondo State Out of the Nigerian Federation – Kayode Ajulo