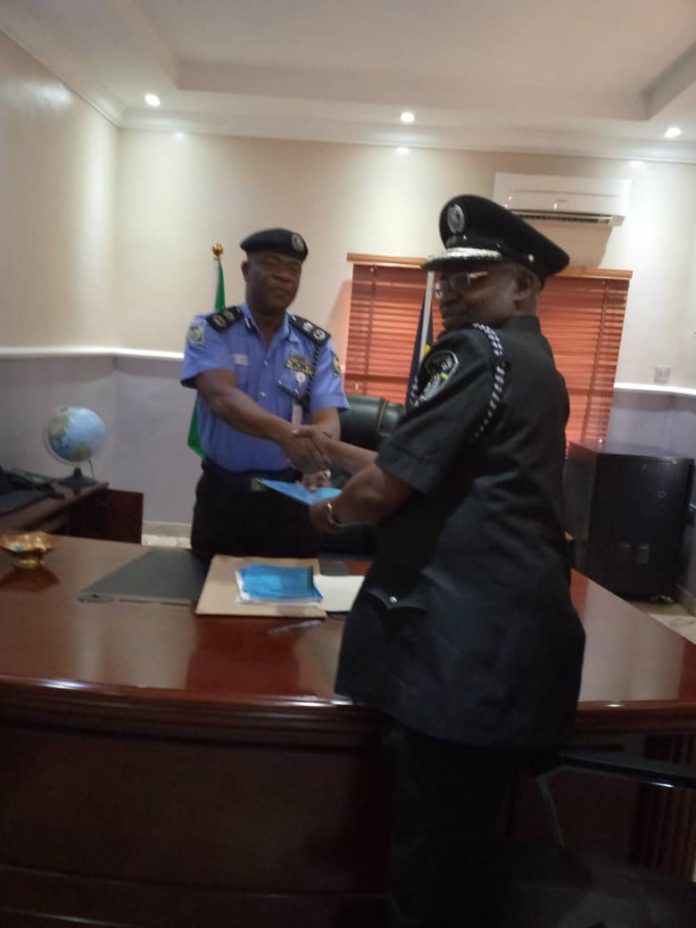 A new Commissioner of Police, Hafiz Mohammed Inuwa has taken over the leadership of Delta State Police Command from CP Adeyinka Adeleke who is proceeding on a course at the National Institute of Policy and Strategy Studies in Jos with immediate effect.

The new helmsman who took over the mantle of leadership at exactly 1:37pm on Thursday 2nd January, 2020, has declared that he has come to build a formidable security structure from where his predecessor had stopped.

He therefore, posited that he would not condone any form of criminality in the State, thereby declaring that it would be fire for fire against criminals who might not want to repent and turn a new leaf.

According to him, “Though no society is insulated from crime, I will not tolerate heinous crime. I am using this medium to warn bandits who parade as herdsmen, armed robbers, kidnappers and others to steer clear from innocent citizens in the state, because as far as the Command under me is concerned, we will not tolerate mindless crimes and criminality.

“Of course you know that police alone cannot solve criminality; and so we need the cooperation of all. We need the public to cooperate with us and make sure they report all forms of criminality around them to us. I will make my number available for all; we need the partnership of everybody if we must respond adequately to the security needs of citizens of Delta State.

“Let me also warn my officers and men, to desist from any act capable of tarnishing the image of the police. I will again not tolerate any act of indiscipline, connivance and indolence. We need to work professionally and with commitment to tackle security challenges bedeviling our society”, CP Afiz affirmed.

Meanwhile, CP Afiz Mohammed who was born on 21st March, 1964 at Ringim LGA of Jigawa State, was enlisted into the Nigerian Police Force on 3rd March, 1990 after attending the elite Police Academy in Kaduna.

The Police Chief was promoted as Commissioner of Police on 31st October, 2017. His last place of assignment was Cross-River State from where he was nominated for a course at the National Institute of Policy and Strategy Studies (NIPSS) before being posted to Delta as CP Afiz Mohammed Inuwa mni.

However, the new CP had pledged to leverage on the existing security mechanism already in place towards enthroning the reign of peace and safety in Delta State.

In the same vein, the outgone CP Adeyinka had thanked the Government of Delta State and Deltans for their cooperation, while urging them to extend the same cooperation to his successor as he superintends over the Command.