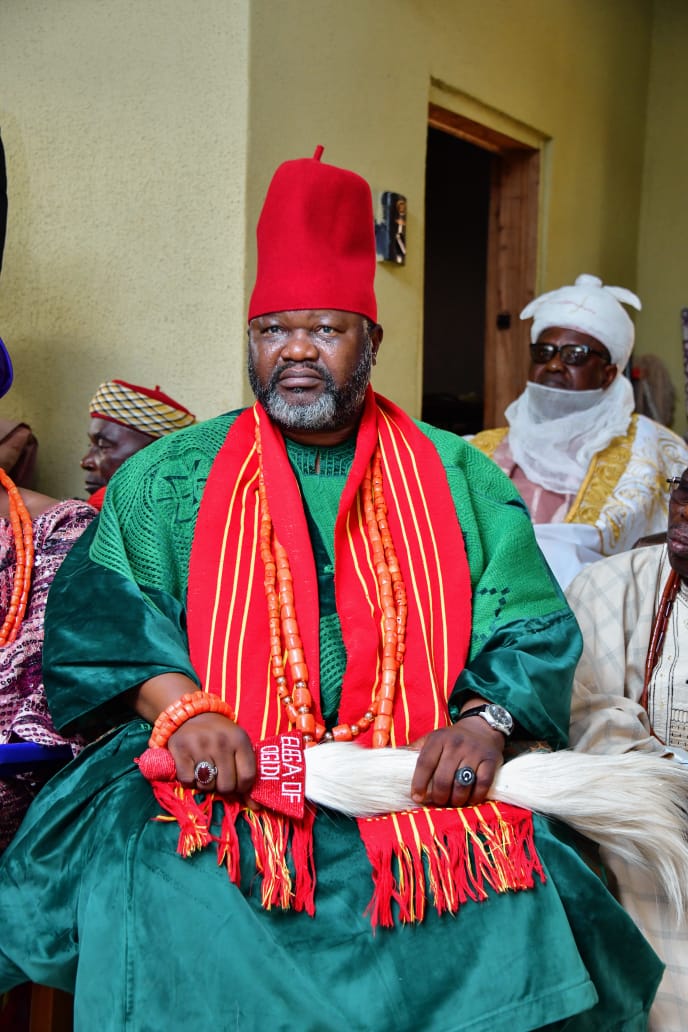 In a colourful cultural ceremony, he was installed as the Elegaa of Ogidi Kingdom, a High Chieftaincy award, that attracted dignitaries from across the country to his Ogidi Ijumu ancestral home. The prestigious occasion of his Iwuye ceremony marks the elevation of Ipinmisho as an Or’ota Chief of the Ogidi kingdom. This honour also places a higher responsibility on him in the discharge of royal obligations to his kinsmen.

Ipinmisho used the occasion to educate youths and the general public on the benefits of staying out of drug trafficking and abuse, as well as the dangerous consequences of drugs. “Drug traffickers have no place to hide with the renewed onslaught under General Marwa’s leadership. Once they are arrested, their drugs are seized, they are prosecuted, and the proceeds of their criminal acts are confiscated. Their reputation is also affected. That is why there is no alternative to legitimate sources of livelihood. In the same vein, those with drug use problems are encouraged to seek help through counselling and rehabilitation services. This way, they can live a healthy life,” he stated.

The less than fifteen-minute drive from Kabba to Ogidi Ijumu on Thursday, December 22, 2022, gave invited guests and well-wishers a feeling of festivity. It was obvious that an illustrious son was being feted. The activities were grandiose; from the royal barbing to investiture rights, sounding the Ogidigbo at the residence of the newest Or’ota, and traditional dance performances, the rich culture and tradition of the Ogidi kingdom were on full display.

His Excellency, Alhaji Yahaya Adoza Bello, the Executive Governor of Kogi State, was ably represented by the Speaker of the Kogi State House of Assembly, Rt. Honourable Kolawole Matthew.

In his goodwill message at the event, the NDLEA Chairman/Chief Executive Officer, Brig. General Mohamed Buba Marwa, (Rtd.), CON, OFR congratulated Asiwaju Lanre Ipinmisho for the Iwuye ceremony. In his words, “this prestigious installation as a member of the Or’ota Chiefdom marks another significant milestone in your service to humanity. My family and the agency share in your joy on this regal occasion, and we also pray that Almighty God will continue to protect and bless you in all your endeavours.”

According to Oba Rabiu Oladimeji Sule, the high-profile traditional title was bestowed on Lanre Ipinmisho because of his outstanding community development services. He expressed optimism that this recognition would inspire him to do more for the community. “We are proud of our son, Elegaa Lanre Ipinmisho. He is a very good man who is peace-loving, caring, and always willing to offer a helping hand. Above all, he is always in touch with his community. This honour is well deserved and will inspire him to serve his community better,” Oba Sule stated.

Oba Dr Solomon Owoniyi urged members of the public to learn from the new Elegaa’s example. “Elegaa Lanre is good to his community, and they have decided to reward him. This is a lesson that when you are good to your community, you will definitely be rewarded.”

Also speaking at the event, Oba William Segun Ayeni noted that “one of the richest cultural practices is the confirmation of a high title to recognise the meaningful contribution of individuals to peace, growth, and development. This ceremony, therefore, is a demonstration of our cultural heritage by appreciating and giving honour to whom it is due.”

Alhaji Abdulrasaq Isa Koto noted that it is a great occasion involving a great personality who is both a friend and a brother, hence we have attended in large numbers to felicitate with him. Oba Olusegun Oloruntoba, the Olugbede of Gbede Kingdom, who described the event as highly symbolic and successful, wished the celebrant good health, a long life, and prosperity.

The leader of the NDLEA delegation, Director of Planning, Research, and Statistics, Deputy Commander General of Narcotics (DCGN) Victoria Egbase, mni, said that the celebrant is a great achiever and the honour is well-deserved. In her words, “we have come in our large number from the agency to celebrate with a noble personality, a highly successful aristocrat, and a philanthropist. Significantly, he believes that charity begins at home, hence his affection for and commitment to the peace and development of his ancestral community. Besides, the rich cultural display is commendable.” Equally represented in the NDLEA delegation are members of the Agency Special Purpose Committee (SPC).

The Executive Chairman, Ijumu Local Government, Honourable Dr. Talfiq Isa, who is the host Chairman, described Elegaa Lanre Ipinmisho as an important son of the community. “We are all here today to celebrate a great leader who believes in identifying with his people. The high attendance clearly shows that he is a grassroots colossus,” Dr. Isa noted.

The presentation of the certificate of investiture to the celebrant by Oba Rabiu Oladimeji Sule to the admiration of invited guests was one of the highlights of the ceremony. The Elegaa, Asiwaju Lanre Ipinmisho, thanked God and the good people of Ogidi Ijumu for the honour. “This is a more significant honour because I will be representing my family on the traditional council in community administration. It is therefore a unique and reputable portfolio in the palace, restricted to only a privileged few. The youth should expect better days ahead. My prayer is that God will grant me the grace and wisdom to serve my people better.” The celebrant stated.

Asiwaju Lanre is a seasoned legal practitioner and administrator with decades of experience both at the bar and in public service. His legal profession started at the chambers of Lateef Adegbite & Co. before he proceeded to the Nigerian Postal Service, where he rose to the position of Secretary/Legal Adviser and member of the management board.

In recognition of his hard work, selfless service, and commitment to duty, President Olusegun Obasanjo, GCFR, appointed him as Director General/Secretary of the NDLEA in December 2006. He had other opportunities to serve this great country. Ipinmisho was a member of the presidential committee under the chairmanship of the then Attorney General of the Federation, Chief Kanu Agabi (SAN), that laid the foundation for the establishment of transparency and due process agencies like the Economic and Financial Crimes Commission (EFCC), Independent Corrupt Practices and Other Related Offences Commission (ICPC), and Bureau of Public Procurement (BPP).

He was rewarded for his great contribution to nation-building by President Umar Musa Yar’Adua, GCFR, with the prestigious National Honours of Member of the Order of the Federal Republic (MFR) in December 2008. Ipinmisho was a member of the Presidential Advisory Committee for the Elimination of Drug Abuse (PACEDA), headed by General Buba Marwa, which was established in 2018. He is currently the Special Adviser to the NDLEA Chairman on National Drug Control Master Plan (NDCMP). He was a member of the Council of Legal Education, Nigerian Law School among many others.

This investiture will go down in history as one of the unforgettable events in the Ogidi Ijumu community.