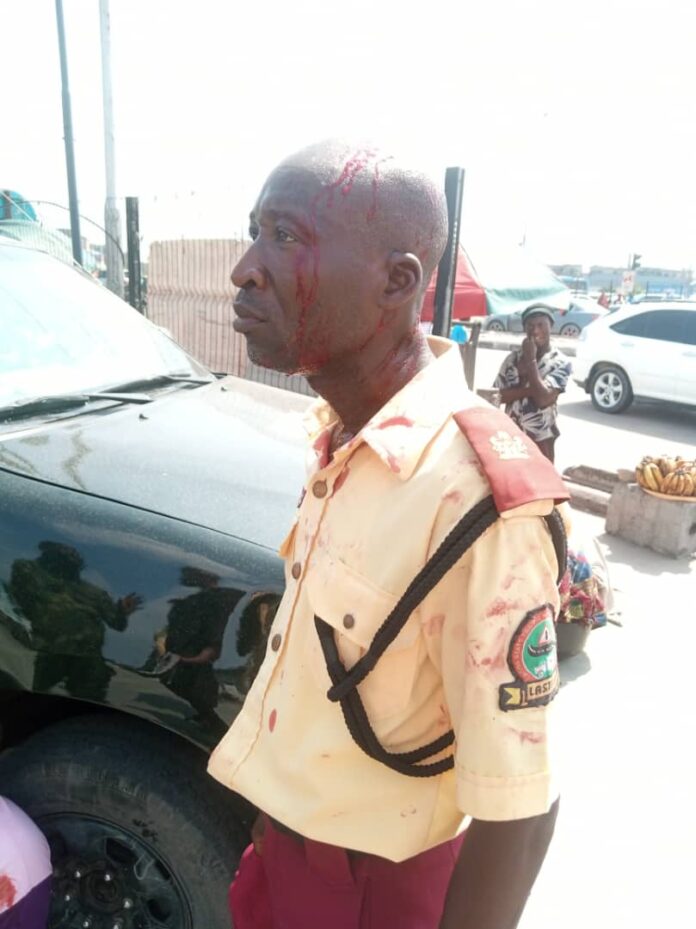 Disturbed by the incessant attacks on its officials on lawful duty in the state, management of the Lagos State Traffic Management Authority (LASTMA) has said that the recent brutal attack on one of his officials along the Lagos/Epe expressway would not go unpunished.

This decision sources said, followed the Sunday November 8, 2020 attack on one Ismaila Lukman at the Jakande Junction in Lekki by a commuter simply identified as Ben. According to sources, Ben, who apparently had nursed a corked anger against the excesses of some officials of LASTMA, couldn’t help but unleashed unprovoked terror on Lukman who was innocently controlling traffic along the expressway.

A statement by the Assistant Director, Public Affairs Filade Olumide, made available to newsmen conveying the General Manger of LASTMA Mr. Olajide Oduyoye’s stance on the issue said the state Commissioner for Justice, Mr. Moyosore Onibanjo has directed that the said Ben should be visited with the full weight of the law.      “The General Manager of Lagos State Traffic Management Authority LASTMA, Mr. Olajide Oduyoye has said that the Commissioner for Justice in Lagos State, Mr. Moyosore Onigbanjo has directed that a man, named Emmanuel Ben who led the assault on a LASTMA Officer, Ismaila Lukman at the Jakande Junction in Lekki while on his lawful duty around 2.20pm on Sunday 8th November, 2020 be made to face the full wrath of the law for the assault to serve as deterrent to others with similar motives. According to Lukman, he was on his beat at Jakande Junction controlling traffic manually owing to the destruction of the traffic signal light during the last protest hijacked by hoodlums when Ben approached him asking that traffic be stopped for him to cross even with the presence of pedestrian bridge nearby which the LASTMA officer said he should avail himself of.  “He then proceeded to step into the carriageway in front of moving traffic causing disruption to traffic flow. Lukman then asked him to leave the road and stop disturbing his work.  An eye witness said that Ben thereafter, threatened that LASTMA officials would be chased off the road like the police and attacked Lukman hitting him on his head with a weapon that seems to be a metal, causing serious laceration resulting in flow of blood, Ben was joined in the officer’s assault by two passersby who are currently at large while Ben was arrested with the help of the military patrol and police around the area, he’s currently at the Ilasan Police Station for prosecution at the earliest possible time.”

Olumide added, “If you recall, the LASTMA General Manager was similarly assaulted resulting in injuries to him along this corridor at that same Jakande area at the end of June this year; Oduyoye vows that LASTMA will not shy away or be cowed into submission from carrying out its lawful duties, no matter the intimidation and promised that anyone caught assaulting LASTMA officers henceforth would be made to face the music under the Law. He said that for there to be free flow of traffic in the Lagos metropolis as set out in the ‘THEMES’ agenda of Mr. Governor, Mr. Babajide Olusola Sanwo-Olu with transportation and traffic management representing the first T, we must all have a change of mindset to obey the traffic law as amended in 2018 by the Lagos State House of Assembly and that anybody who refuses to obey those traffic laws should be ready to face the consequences as stated in the Law. He further advised that road users should come to terms with the fact that LASTMA was constituted by the Law which has conferred some responsibilities on the agency.