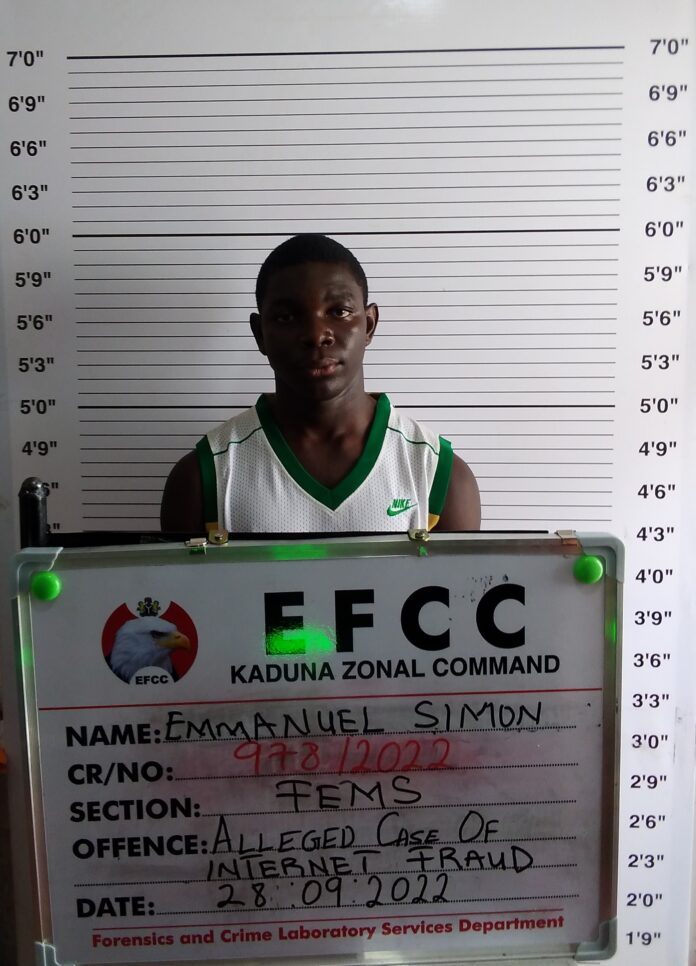 Justice Darius Khobo of the Kaduna State High Court on October 26, 2022, convicted and sentenced one Emmanuel Simon to three months in prison for offences bordering on internet fraud fraud.

Simon was arrested by Operatives of the Kaduna Zonal Command of the EFCC following intelligence linking him to cybercrimes.  He is said to have used the Instagram account name, Hack4ord and Mrs Gina from California, USA, to send scam messages to unsuspecting persons to defraud them by telling them to invest in cryptocurrency trading with the promise that they will make profit in seven days.

The one count amended charge preferred against Simon reads: “ that you, Emmanuel Simon, sometime in July, 2022 in Kaduna within the Kaduna Judicial Division of the High Court in an attempt to cheat, impersonated one Mrs. Gina (an American citizen from California) through your Instagram account named Hack4ord when you claim to be into cryptocurrency trading investment, when you knew you were not, and you thereby committed an offence contrary to Section 142 of the Kaduna State Penal Code Law, 2017 and punishable under the same Law”.

The defendant pleaded guilty to the one count amended charge.

The prosecution counsel, E.K Garba and defence counsel, I.S Yahaya urged the court to enter the plea bargain agreement between the parties as the judgment of the court.

Justice Khobo convicted and sentenced Simon to a term of three months imprisonment or a fine of N100, 000.00

He is also to forfeit an iPhone 12 Pro Max used to commit the crime.