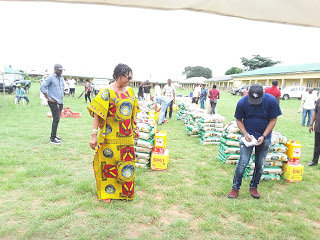 Residents of the ancient town of Ubulu-Uku in Aniocha South Local Government Area of Delta State on Monday, April 6, 2020, received food items running into millions of naira as the towns politicians led by the director general of Delta State Capital Territory Development Agency (DSCTDA), Hon. Mrs. Joan Onyemaechi Mrakpor, and her political associates visited.
Addressing the few elders who came to receive the items on behalf of their quarters, the DSCTDA boss noted that the food items were purchased with money contributed by public office holders of Ubulu-Uku extraction. She also added that it is not a party affair and as such everyone would benefit irrespective of party affiliation. The items include 100 bags of rice, two bags of beans, 25 cartons of groundnut oil and 25 cartons of tomatoes.

” By the grace of God, we are not here today for politics. That is why I sent for all the leaders of the various quarters. When they receive the items, they will know how to distribute from house to house without violating the directive for social distancing. Even if it is a cup of rice that gets to you, please be happy and receive it as it is from your children, the former lawmaker stated.

She further explained that the government did not release any money to them to purchase or distribute food items but that the items were purchased with the money realised from the contributions made by Ubulu-Uku sons and daughters.
She enjoined the people to continue to adhere to government’s directive on social distancing and wash their hands regularly to stave off the corona virus.

Receiving the food items, the diokpa of Idumu-Osume who is 107years old, Pa Akeje Ugbechie, prayed for all Ubulu-Uku public office holders who contributed to the project. He urged them to continue to work for the development of the town and commended Mrakpor for rallying the sons and daughters to bring succour to the people. The redeemed of the Lord returned bearing gifts.