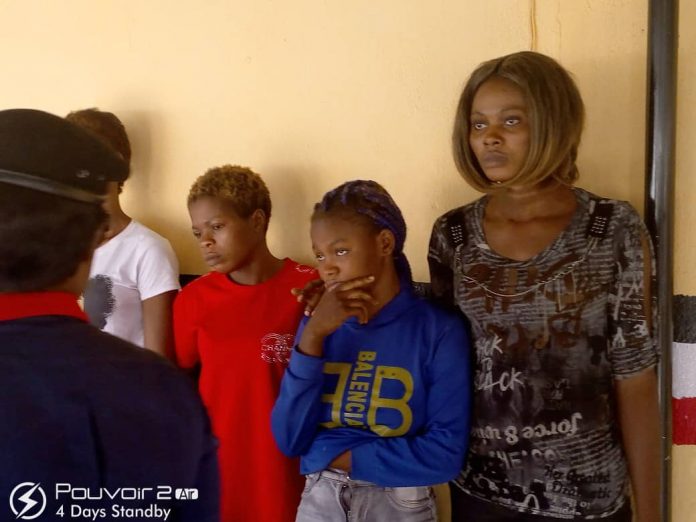 The ring-leader of a human trafficking syndicate who specialized in selling young girls out for prostitution has been arrested.

The 30 years old suspect, one Omowunmi Michael, was arrested at her Iyana-Ipaja home by operatives of the Nigerian Security and Civil Defence Corp (NSCDC), Lagos State Command.

The operatives also rescued four young ladies from being trafficked to Mali. Those rescued were identified as Aloaye Joy, 22, Victoria Oshioke, 18, Amaka Eze, 23, and Anuoluwapo Mustapha.

It was learnt that Omowunmi’s arrest was sequel to a disagreement between the victims and the gang leader over how much to be paid by each of the victims.

It was further learnt that the suspect had demanded for an upfront payment of a N1million by each of the victims before she would hand them over to the main dealer who is based in Cotonou, the Capital of Benin Republic.

It was also learnt that the suspect, having failed in her desperate bid to secure any financial commitment from the victims threatened to return them to Edo state where they were early recruited from.

It was further gathered that out of anger, two of the victims, Aloaye Joy and Victoria Oshioke, stormed out of the house and were asking a truck driver to give them a lift to Benin when they were first sighted by an operatives.

Parading the suspect at the Command Headquarters, Alausa, Ikeja, the Commandant of NSCDC, Lagos State Command, Otiobhi Ehi Cyprian, said that the suspect was arrested for allegedly trying to traffic four ladies to Mali for prostitution.

The Commandant said that the suspect was apprehended on Wednesday, January 15, 2020 at about 9.20am at number 13 Abuke Oku Street, Iyana Ipaja.

He said that at the time of arrest, the suspect, one Omowunmi Michael, has in her house four ladies, who intended trafficking.

“Michael is alleged to have recruited the victims to travel to Mali for prostitution. Two of the victims, Victoria Oshioke and Aloaye Joy were transported from Benin, Edo State by one Favour who is currently on the run while Amaka Eze hails from Onitsha in Anambra State was linked to the suspect by one Lekan” he added.

The Commandant while discouraging other vulnerable young ladies not to fall into the hands of human traffickers who may promise them good jobs abroad, added that the danger of human trafficking is overwhelming.

Victoria Oshioke, in her statement said that she was first trafficked to Mali when she was 16 years old by her boyfriend.

She said that her boyfriend sold her to the syndicate based in Cotonou who in turn took her to Mali where she was made to sleep with different men.