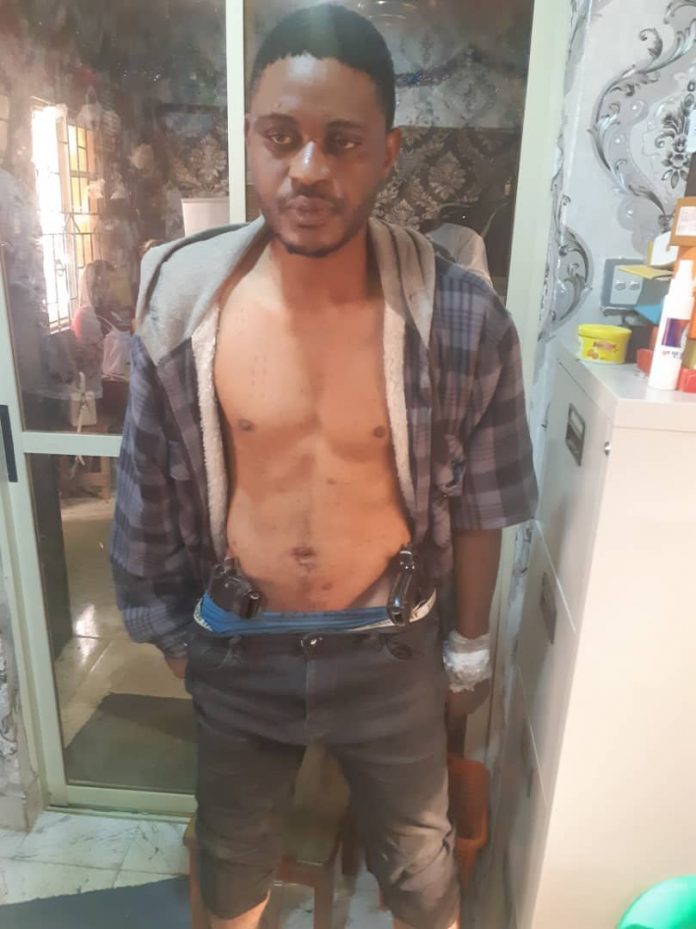 A serial armed robbery suspect, Ehuimwe Akhire, 35, has made startling revelations on his journey to the underworld operations. 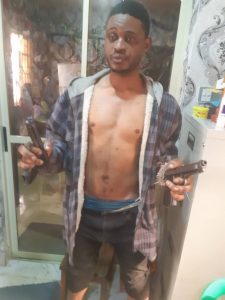 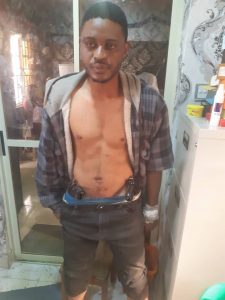 According to the suspect who allegedly engaged detectives who went after him in a gun duel but late shot in one of the legs by a superior firepower, surviving as a young person without joining any criminal gang in    Ajegunle community is a miracle.

Akhire, former prisoner and a native of Uromi, Edo State, said he came to Lagos about 15 years ago, as a ‘good boy’, but that he was unfortunate to live in Ajegunle (AJ City), where joining a gang and taking drugs makes young people’ feel cool’.

He had participated in dozens of robbery operations in Lagos, Osun, Edo and other parts of the country be he was arrested recently by the operatives of the Inspector-General of Police Intelligence Response Team (IRT), Lagos, headed by CSP Philip Rieninwa after a brutal robbery operation.

Akhire’s trailing by the intelligence unit was ordered by the commander of IRT, DCP Abba Kyari, who had received reports of his gang’s terrorist’s disposure in the southwest.

Two Browning Pistols, fully loaded were recovered from him, while members of his gang is still being trailed.

The Brownin pistols ranks among the 10 most dangerous guns in the world. It was massively preferred in World War I and II along with Vietnam and Korean War.

The design of M1911 was done by popular American gunsmith named John Browning.

Akhire who was described as a notorious armed robbery kingpin that had been involved in all sorts of crimes, told Saturday Guardian, that: “I am a criminal who have tasted all kinds of crimes. I was a petty thief before I graduated into armed robbery, but it was not my fault. Search for a better life brought me to Ajegunle where crime is a way of life. It was when I came to AJ city that I came to realise that crime is a culture in the area, except you don’t want to make friends. I must confess to you, parents encourage their children to commit crime in Ajegunle. You will be stigmatized if you don’t snatch bags or do petty stealing.

“It was when things became difficult for me and there was nobody to assist me that I decided to join them. For instance, when I begged people for as low as N10, they would tell me to join them in their ‘work’. Stealing and robbery is called ‘work’ in AJ.

I noticed that almost every guy in the area belonged to one cartel or the other. I now decided to join a group, but I was given the condition to procure a gun before I would be accepted. It was while I was looking for a gun that I was arrested by the Federal Special Anti Robbery Squad (FSARS), Adeniji Adele. I was charged to court and remanded in prison. It was in the prison that I met other criminals from AJ City. We formed a gang in the prison. When we came out, we started pick pocketing, traffic robbery and burglary. Along the line, my gang members started graduating to armed robbery operations. I was lagging behind, because I had no gun. My mates were making mockery of me. They often scolded me whenever we met in drinking joints. I made up my mind that I was going to grow up, so I also acquired a gun and I was initiated into real crime and the rest is history.

“My gang is strong and formidable. We do all sorts of crime. I am telling you all these because I want to repent. On New Year day, I went to The Redeemed Christian Church to make a vow that I would no longer go into crime before I was caught. There was a robbery operation that nearly got my gang into problems, so all of us ran away when we knew that the police were after us. Obilo, our gang leader ran to Dubai and I ran to Osun State. I was happy that God scattered us, so I went to church on the New Year day to confess my sins, even though I did not come out when the pastor made an altar call for sinners. I told God my mind and made a vow. Perhaps the devil needed my soul, few days that I made the vow, Obilo called me that he has returned from Dubai. He convinced me again to go to work with him. He gathered us again and we resumed work. The result is that I was shot in the leg and I am in the police net while Obilo and others escaped.

“If God grants me another grace or opportunity, I will never go back to crime.

” You asked why I had some charms with me if I had repented, I have repented, I was planning to destroy the charms and my weapons when Obilo came. The charms are not for me to disappear, but it is for me not to be caught while I was escaping from robbery scene. Yes I had two guns stocked in my body when I was arrested, but I have never killed. I only use the guns to threaten victims. I also use them as instruments to break car windows during traffic robbery. I told you that I have done many crimes, I won’t lie to you. I am a repentant criminal ‘.

“I told you that there is no crime that I have not committed. We used to rob Bank customers. We used to operate in three commercial motorcycles (Okada). We visit banks, while Festus who dressed corporately would enter the banking hall looking out for those withdrawing money, we would position ourselves like okada riders. As soon as Festus comes out, he would point at the target and we follow the victim till we find a convenience place to rob him or her .We used to go as far as  Cotonou, Republic of Benin to rob. I have made money in robbery .I bought many plots of Land. We used to make money but not too much. My highest share is N1.2 million in an operation.

” The risk is too much, because we used to confront the police during operations .I worked with many gangs, sometimes, we joined other gangs to go for operations. We meet other gangs during operations. They would go their ways while we give them way to do their jobs. Many of the robbers that I knew died during gun duel with the police, but I had been so lucky until this unsuccessful one.

“My advice to young ones, especially those in Ajegunle, is that crime does not pay. They should not listen to advice from their peers who will be mocking them and blaming them for not being sociable. Don’t start, because once you start, it is very difficult to stop. You know, the first, second and the third operations are always very successful. Be it pick pocketing, traffic robbery or armed robbery, you must get tangible amount or things, so it would tempt you to commit more .For parents, they should stop encouraging their kids to commit crime. Most of our parents know what their children do, but they won’t correct them. Some parents collect or receive proceeds from crime from their children. Religious organizations, Schools, community leaders should carry out massive reorientation to change the mindsets of the children”.

A source at IRT, said the suspect and four others were arrested on January 16, along Isheri Igando Road when they wanted to start operation at about 4:30pm

“When the Commander of IRT, DCP Abba Kyari, got intelligence report that the gang which had been in our wanted list for series of armed robberies, was planning to attack  bank customers, he sent his special squad led by the South west coordinator, CSP Philip Rieninwa to go after the robbers. Reininwa and his team rounded up Akire and five others at Isheri, Igando .