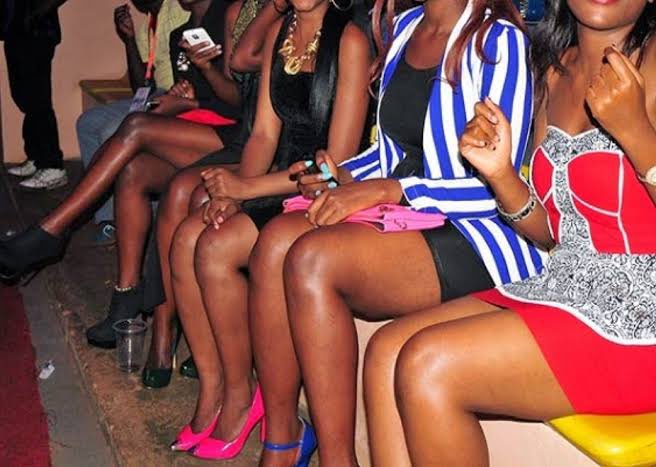 According to information gathered by our reporter, Udeogalanya, who is also the Chief Executive Officer (CEO) of Angels Assurance Security Outfits Limited, discovered the first girl Onyinyechi on Saturday morning and later used information gleaned from her to rescue other girls from hotels in Festac Town.

In the process of rescuing the girls, Udeogalanya and members of her staff also arrested three of the alleged traffickers.

The suspects were handed over to Area E Police Command, for transfer to the National Agency for the Prohibition of Trafficking in Persons (NAPTIP).

One of the suspects, identified as Ejike, had forcibly had sexual intercourse with two of the girls several times before his arrest. The two girls are ages 14 and 16.

It was also learned that before the rescue of the girls, a first batch of girls and three boys had been moved from the hotels to Ghana via road.

The traffickers got the girls from Akwa-Ibom and Abia states. They promised them jobs as cleaners in Lagos State, but when they got to Lagos, they told them to prepare to be taken to Ghana for prostitution.

They were told that the Ghanaian Cedi was higher in value than the Nigerian Naira, thus they would become rich within days of putting themselves to work.

The girls were housed in two different hotels and were locked in rooms. It was in those rooms that Ejike went to have sex with the two girls, while he groped the breasts of others.

The 14 years old girl said: “On the first of my arrival, he had sex with me twice in the room, where he had locked me. After that, every time he was going out, he would lock me in. I stayed there for three days and in those three days, he was always having sex with me.”

One of the rescued girls, Harmony, has been trafficked once to Anambra State by two men, where she was forced by her madam to have sex with 35 men per day at N1000 per client.

She was told by her traffickers, who moved her from Akwa-Ibom to Anambra State that she would be going there to work as a waitress in a bar. She was also promised N20, 000 as her salary.

Harmony, the first child in a family of five children, with a crippled father and mother, selling bean cake by the road, felt it was a good deal.

When she got to the supposed beer parlour, she was shocked at what she saw.

She said: “I saw nine years old girls, 10 years old girls and 15 years old girls being forced by their madams to hustle. I asked a woman there what the girls were doing just to be sure, she said prostitution. My madam said I should work for her, I said no. She starved of food until I had to start doing the work. The suffering there was too much. I was punished several times by kneeling on periwinkle shells and broken bottles. Clients pay N1000 and they are usually in a queue. In a day, I make between N30, 000 and N40,000, that means between 30 and 40 men in a day. My madam collects all the money. There was a time when a client gave me N5000, but he did not touch me, he only asked me to leave that hotel. My madam saw the money and collected it from me.”

The leader of the kingpin has been identified as Ebuka and on the day of the bust, was alleged to have literally vanished into thin air, claimed the girls.

Following the bust, Ebuka had been calling Udeogalanya with a Ghana telephone line. He initially asked her to name her price, so that she could release the girls back to him and back out, but later offered her N2m, which she turned down.

Udeogalanya, who said that her heart bleeds for the girls, immediately moved them to NAPTIP, this was even as she expressed concern for her own safety.

Although the bust was made on Saturday and the suspects had been with the police, but rather than transfer the case to NAPTIP, the agency in charge of such matters, the police at Area E Command was nursing the idea of charging the matter to court.

On Wednesday, our reporter contacted the Lagos State Police Public Relations Officer (PPRO), Benjamin Hundeyin, asking to know when the matter would be transferred to NAPTIP, facts of the case and the names of the three suspects.

Hundeyin only responded that the matter would be transferred that same day (Wednesday).