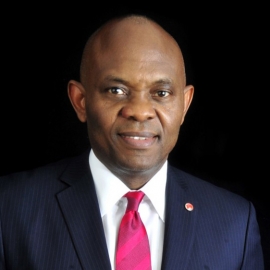 Onicha-Ugbo hometown of the mother of banking wizard and international humanitarian, Tony Elumelu and other towns in Delta north area was thrown into wild jubilation last night as six trailer-load of rice donated to the communities as palliative for lockdown arrived.

Onicha Ugbo and Onicha-Uku are not the only beneficiaries of Elumelu’s goodwill as the four Local Government Council in Aniocha-Oshimili got one trailer load each.

Out of the six trailer loads, his mother’s town, Onicha-Ugbo got one, his father’s place, Onicha-Uku got one, one trailer each is for Aniocha North, Aniocha South, Oshimili north and Oshimili South LGA’s.

Residents of the communities rained prayers on their son for remembering them at this trying period.

“This is a gift to his motherland. Words cannot express our gratitude to him during these difficult and uncertain times.

” We pray that our good lord will continue to shower eternal blessings on him, his family and Elumelu clan”.

It was gathered that the gesture by the titan of Africa’s financial sector is to cushion the effect of the lockdown and also to appreciate his people on behalf of his loving mother and his amiable junior brother, Rt. Hon. Ndudi Elumelu who is the minority leader in Nigeria’s House of Representative. He represents AniochaOshimili Federal Constituency.

Elumelu has changed the lives of African young start ups through his Tony Elumelu Foundation.

In the heat of the Coronavirus pandemic, Elumelu facilitated the donations of N5bn through UBA Foundation to combat the pandemic in Nigeria and 19 African countries where UBA operates.

In addition, Elumelu personally donated N1billion to the private sector led coalition against Coronavirus in Nigeria