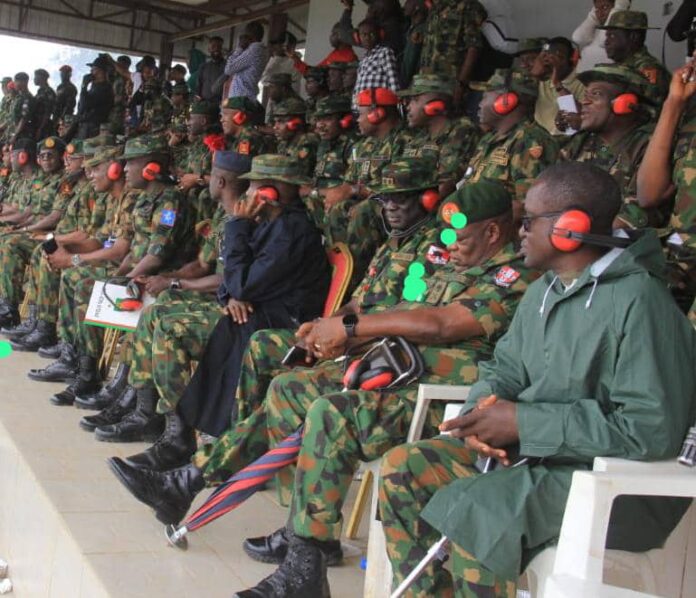 The Chief of Army Staff (COAS) Lt General Faruk Yahaya has charged Army Cadets of Regular Course 69 of the Nigerian Defence Academy (NDA) to deploy their newly acquired combat skills and competences to surmount security challenges in the country.

General Yahaya gave the charge as the special guest of honour at the Battle Inoculation phase of Exercise Camp Highland, which wrapped up final exercises for the Army cadets, before their passing out of the prestigious Academy later in October this year.

The COAS, who expressed satisfaction over the level of training received by the Cadets, noted, that with the recent review of training curriculum in the academy, there has been remarkable improvement in the quality of cadets’ combat training, in tune with NA’s deliberate capacity development effort towards tackling contemporary security challenges. He expressed optimism, that as junior commanders, they will add value to ongoing operational efforts to restore peace and security in troubled parts of the country.

While pointing out that a lot of resources have been invested in training the cadets, the COAS expressed appreciation to the Commander – in- Chief of the Armed Forces of Nigeria, President Muhammadu Buhari for the confidence reposed in the NA, as well as his support and strategic guidance.

He assured the President and all Nigerians that the NA in synergy with other services and security agencies will “speak to the insurgents and bandits in the language they understand”.

Describing Exercise Camp Highland Battle Inoculation as a “baptism of the Army Cadets into battle”, the Commandant NDA, Maj Gen Ibrahim Yusuf disclosed that the exercise is a culmination of five years of training for the Cadets before their graduation.

The exercise featured a combat assault on a simulated objective with live firing by a combat team of cadets, supported from the air by the Nigerian Air force to inject realism into the exercise.