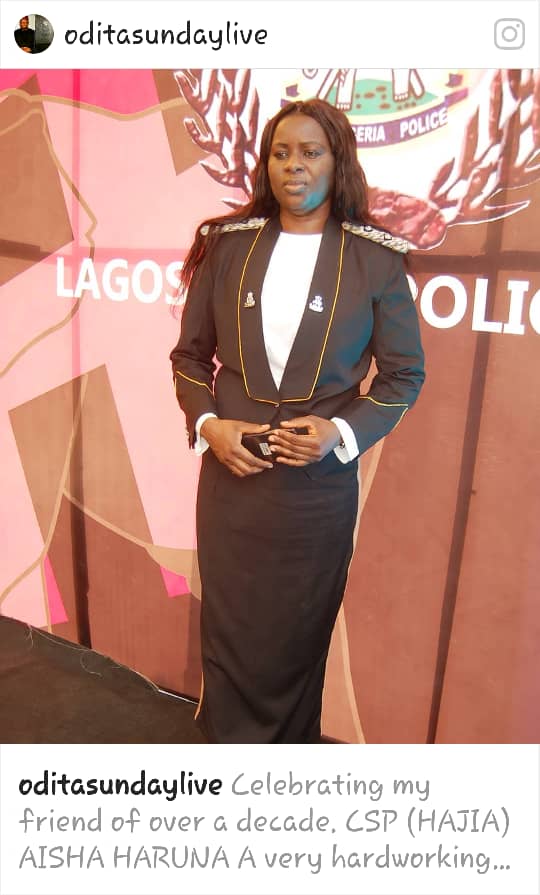 There are women who consciously understand their purpose in life, hence they seemingly appear as career icons for every woman in Nigeria – and one of them is CSP Aisha Haruna.

Aisha was born in the early 1970s to the family of Alhaji and Alhaja Bamidele Ali Maliki, hails from Ilorin in Ilorin West Local Government Area of Kwara State. She started her early education at Wesley LSMB Primary School, Ilorin between 1977 and

This woman of repute joined the Nigeria Police in December 1989 and was appointed Cadet Inspector while she proceeded to Police academy, Kano from 1994 to1996.

Aisha was the Divisional Police Officer, Ikoyi, in Lagos State and while in this capacity, she has successfully:

Arrested a notorious kidnapper, Emmanuel Nwangwu and his Ghanaian wife, who are based in Ghana. They specialized in kidnapping children below the ages of 2 after posing as driver and nanny respectively, in the homes of their victims mostly prominent Nigerians

Tracked and the eventual arrest of five kidnappers among the kidnappers who kidnapped Mrs. Rhodes Vivour, wife of a Justice of the supreme court of Nigeria and two others on 22nd May 2013.

. Rescue of  a  16  year  old Olufolabi Adeniji  pupil  of  British/American

International School and arrest of the kidnappers in a forest in Ilaro, Ogun stateon22NDMay2013, without paying ransom.

Arrested 5 burglars including ladies syndicate that specializes in stealing of gold/diamond and other costly jewelry in homes of prominent Nigerians. Their modus is that, they pose as domestic staff primarily to gain access in the form of employment and steal from the homes of their victims with any slightest opportunity.

On 15th of April 2013, one Solomon Martins ‘m’ was arrested in connection with robbery and snatching of a Toyota Corolla car with registration number KZ677KJA.

 Arrested the master  minder  of  the  kidnapping  of  Dr.  Alasa  one

AbduramonIzika‘M’inJanuary2013.He confessed to the crime.

    Arrested several other armed robbers in the comfort of their homes based on intelligence and also the rescue of various kidnapped victims.

Inrecognitionofheralloyedenthusiasm,spiritedness and dedication to duty as well as her services to humanity and outstanding innovative contribution towards the overall development to the security operation in Nigeria, CSP Aisha has clutched an avalanche of awards, these include Citizen of Integrity International Award for Courage in Management and Control by Royal Achievers International Media Network in April 2011; Award of Excellence in Crime Management by City Pride Magazine in 2011 and 2012 respectively; Embodiment of Peace Award by Police Community Relations Committee (PCRC) Area ‘A’ Command in 2011; Shield of Peace Award in Appreciation of Hard Work and Dedication to Duty in securing lives and properties within Ikoyi and Lagos state by PCRC, Ikoyi Division; Award of Excellent conferred by Society for Public Orientation Against Drugs (SPODAC), 2011; Merit Award of Recognition of Selfless Service to The Nigerian Police and the Community; Merit AwardbyPCRCLionBuildingDivision2012;Merit Award by MOA

She has attended several courses, trainings and programmes within and outside Nigeria, including International Visitors Leadership Programme in Washington DC (IVLP) in 2012.

Aisha is currently the officer in charge Oil Producers Guard (OPG) Lekki, Lagos where she has over a thousand personnel under her watch.