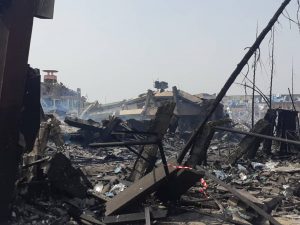 It was a black Sunday at the Ade-Shoba area of Abule-Ado in Amuwo-Odofin Local Government Area, Lagos, as industrial gas explosion resulted to the death of 15 persons, with property worth billions of naira shattered.

The explosion, which started at about 9 a.m., affected over 100 buildings, including the Catholic owned Bethlehem Girls College, a boarding school located in the area.

At least 2,500 vehicles were also shattered with over sixty persons injured. The injured were rushed to the Nigerian navy Reference Hospital.

Two Reverend Sisters, a family of three, and five students were said to be part of the fatalities, as many sustained various degree of injuries.

It was gathered that the inferno was triggered by a tipper supplying sand at a building construction site in Ade-Shoba.

The tipper had allegedly developed a fault and stopped close to a cooking gas refilling station, which was not too far from an NNPC gas pipeline.

Eyewitness account had it that the tipper driver had after many failed attempt to start the vehicle, succeeded in turning on the ignition which triggered a spark from the exhaust pipe, leading to the explosion.

According to a Comptroller of the Federal Fire Service, Zone F, Ganiyu Olayiwole, who spoke briefly on the cause of the explosion, the area was already littered with gas emission, which made the fire to spread drastically.

Residents of the area who are now counting their losses, are however divided on the cause of the explosion. While some are of the opinion it was a gas explosion, others are speculating it may be a terrorist attack.

The Flag Officer Commanding, Western Naval Command of the Nigerian Navy, Rear Admiral Oladele Daji, was on ground to access the situation.

Daji said the Nigerian Navy would give the needed support in the investigation into the actual cause of the inferno.

The Rear Admiral who is also the commander of Operation Awatse said: “It is very unfortunate that once again we have to see this kind of devastation when we are at peace time and not a time of war. The relevant agencies of government carrying out the assessment will determine but from what we have seen on the ground and the evidence gathered so far, there is complexity of some people dealing with cooking gas, that is judging from the several cylinders scattered all over the incident scene. Some eyewitness believed that there was gas leakage that had saturated the air, just waiting for something to ignite it and that truck provided it.”

Speaking in what the Navy had done to ensure structures in the right of way of petroleum pipeline were removed, he said: “Our operation to demolish properties on right of way of petroleum pipelines have already been carried out here, but these buildings are outside the pipeline right of way, but looking at the buildings, common since tells us they are not safe, there should be some setbacks, there us need for the relevant agencies if government, particularly the state government, to consider revoking the C of O of building that are not given adequate setback from the pipeline right of way.

“The various units if government are here, I said LASEMA, I saw the anti bomb unit, the Nigerian Navy explosive department is also here, let’s not be too hasty to come to any conclusion. I believe that at the appropriate time, the main cause of this sad incident would be made known. As at the time we got the report, there were 60 children from Bethlehem school with varying injuries brought to Navy hospital. I am sure those of them who have been stabilised would be discharged hopefully today to go home and those who need follow up treatment will be given.”

He also stated that the agency cannot give the fatality and casualty figure as rescue operation was still ongoing.

He said: “It is a very devastating issue, thank God we have a robust emergency plan in place, we have well equipped emergency responders in Lagos State, with that, we are able to be on top of the challenges here, we were able to rescue many people here, the operation is ongoing and we are going to carry out a holistic investigation and we are going to empirical and with that we will be able too tell the people of Lagos State what caused the incident.

“However I will appeal to the people of Lagos to remain calm cool and collected. We are on top of these. When we come up with the details of the investigation, we will tell you the casualty figure, and the fatality figure. What I want you to take is that we are performing our duties well under the watch of Governor Babajide Sanwo-Olu and there was never overlapping of duties and our response was swift, prompt efficient  and effective