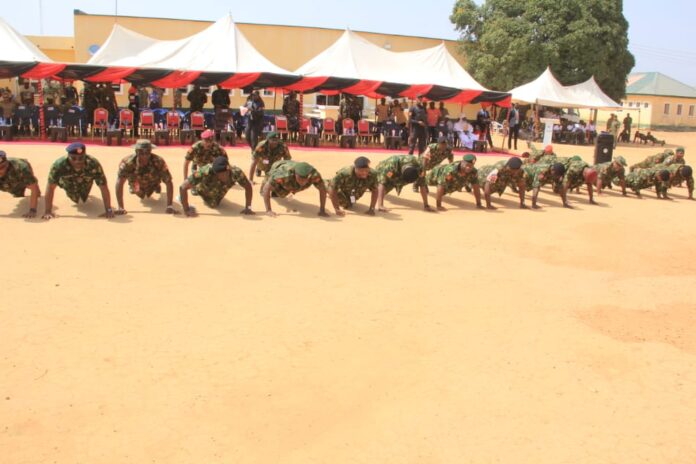 The Chief of Army Staff (COAS) Lieutenant General Faruk Yahaya has charged troops of the Nigerian Army to deploy their newly acquired combat capabilities to defeat non-state actors disrupting the peace of the country. The COAS stated this today at the Nigerian Army Training Camp, Kachia in Kaduna State, during the Final Exercise and Graduation ceremony of Trainees of Exercise Restore Hope III.

General Yahaya expressed confidence that with the performance of the final exercise witnessed today, their deployment in support of ongoing operations will change the game and bring the tide against the nation’s adversaries, adding that that the security challenges bedeviling the country requires the use of lethal force.

Gen Yahaya, who stated that he was pleased with the results received from troops of Ex Restore Hope I and II, tasked the graduating personnel to effectively employ skills and competences acquired to deal with the various security challenges confronting the country, adding that peaceful and secured atmosphere must be created for the successful conduct of the 2023 elections. He however admonished the troops to remain apolitical and conduct their operational tasks devoid of politics. The Army Chief was not hesitant in pointing out that any personnel caught on the wrong side of the law will not be spared.

The training, which commenced from July 18, 2022 to November 17, 2022 with a total of 647 soldiers, 13 officers, 134 senior non-commissioned officers and five hundred 82 Regular Recruit Intake drawn from Nigerian Army formations, units and command, is aimed at developing a lethal fighting force with high intensity in advance training of troops ready to be deployed in any theatre of operation.

“Highlights of the event were the long distance shooting at 300m, sniper shooting at 500m, shooting after physical efforts under timing with effects, small team tactical movement to rescue hostages and Krav magga unarmed combat demonstration.”