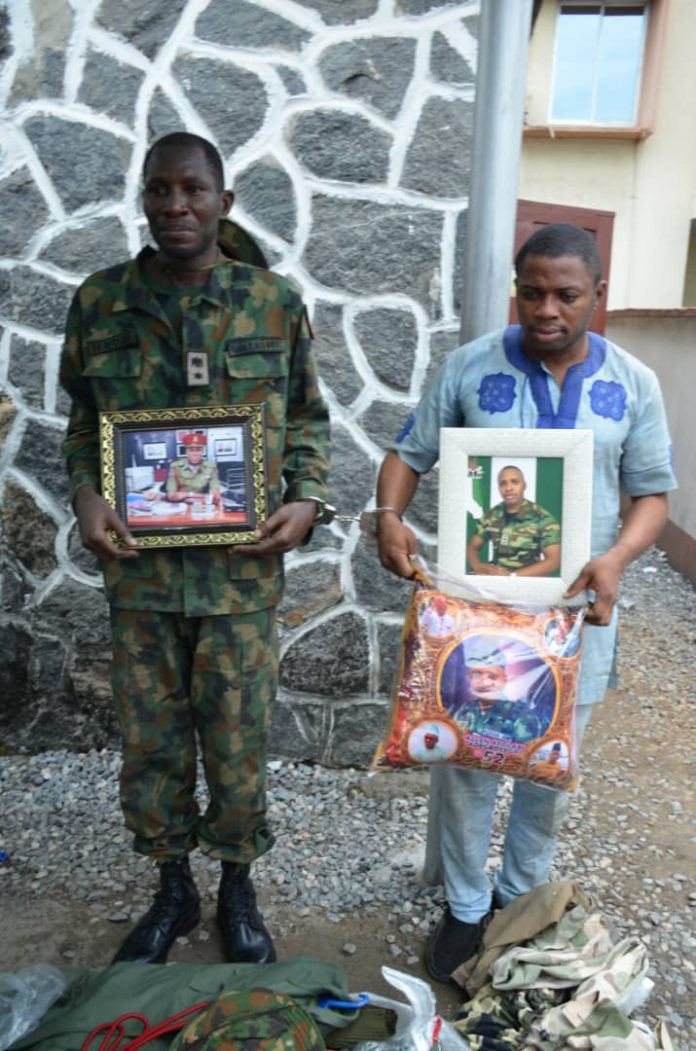 .Vows to clampdown on imposters

Decoy operatives of 81 Division, Nigerian Army (NA), have arrested 13 fake military personnel, among whom is a Lieutenant -Colonel, Afolabi Hassan and a Major, Afolabi Allen Adegboyega, who had been parading themselves as senior officers of the army, for 12 years. 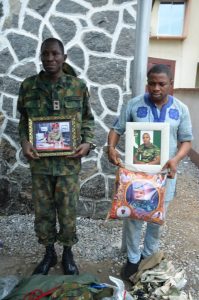 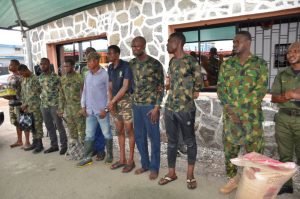 The suspects who were arrested during the ongoing army ‘Operation Checkmate’, had various military accoutrements in their possession.

Parading the suspects at the Division’s Headquarters, Victoria Island in Lagos, yesterday, the General Officer Commanding (GOC), 81 Division, Maj. – Gen. Olu Irefin, revealed that the impostors were arrested based on credible information.

According to the GOC, preliminary findings had it that the said Hassan, had been impersonating as an officer of the NA since 2008, and had been previously arrested for the offence.

It was learnt that a search executed at the suspect’s residence, at No. 19 Clem Road, Ojokoro, Lagos, led to the discovery of one NA pullover, one woodland camouflage T-Shirt, and five NA Uniforms.

Irefin said: “ I think one thing the lockdown has done for Lagos State is that our operation checkmate, which was initially meant to check our soldiers from breaking the law, is yeilding more results. Today we have 13 impostors paraded. We have a Lt. – Col., a Major, and you will be shocked at the level they are impersonating.

“ The Lt. – Col., and the Major had big picture frames, with pictures of them wearing their fake ranks. When you check their Facebook page, they also claimed to be army officers. Jassan had used fake Provost letter-headed paper to apply for visa. Unfortunately for him, that is a wrong channel of applying for visa, because we don’t do it directly.  When all these people create problems within the Lagos environment or up to Ogun, one will see them and say Nigerian Army. ”

As a way of ending the scourge of military impersonation, Irefin urged security agencies on law enforcement to always check the Identity Cards (ID) of soldiers, to verify they are not impostors.

He said the army authority will find out how the suspects got the uniforms and then hand them over to the police for prosecution.

“So I want to use this medium to appeal to every law abidiing citizen, security agencies, that occasions where they see soldiers on the road, they should be bold to ask them of their Identity Cards. Where they have doubts, they should make contact with military units and we will be able to make the arrest.

“All these arrest you see is based on information and the Oeoration Checkmate. We will continue with the operation to rid Lagos and it’s environ of these criminal element, ” he said.

Speaking on how he got the military accoutrements in his possession,  the 45-year-old Hassan said he bought them from Abacha Baracks Market in Abuja.

Hassan who also claimed to be a dismissed soldier since 2016, said he was arrested at Abule-Egna area of Lagos.

He said: “ I used to be a soldier, and wá dismissed as a Corporal in 2016, for going Absent Without Leave (AWOL). I am married with four children, so it was the need to met family expectation that forced me into using the uniform to escort tracks from Tincan, to Mile 2, and other areas. I also escort vehicles do other states.

“ But I was arrested after a solider called me, saying someone wanted to buy a land and will be needing my service. He sakded me to meet them at Abule-Egba, and when I got there, I was arrested. ”

For 52-year-old Adegboyega, possessing as a military personnel was to scare land grabbers who had threatened to take over his property at Sango, Ogun State.

He claimed to be the owner of a private security outfit called System Protection Executive Security. A check on his Facebook account also revealed pictures of the suspect in various military uniform.

“I know I am not a soldier, but it was people around and friends that talked me into impersonating. I had bought a land at Sango, and when I went to develop it, the landgrabbees came and were disturbing. Seeing I was a private security practitioner, my friends advised me to threaten the land grabbers saying, I was an army officer.

“ I yielded to their advise, and I photo edited a picture of an army officer I found online, and photoshopped my face in place of his. Since them, I have been parading myself as a senior army officer, and I command respect from many,” he said.