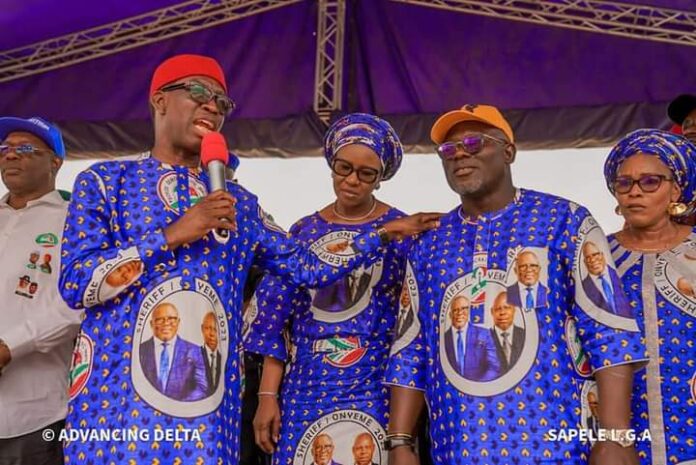 He said that the Federal Government, in its lackluster administration, orchestrated collapse of its roads in the state through deliberate neglect and abandonment.

Okowa stated this in Sapele at PDP’s campaign in Sapele and Okpe Local Government Areas and noted that the poor attention of the Federal Government to Delta had continued in spite of the state having a son as Deputy President of the Senate.

According to him, all our roads – from Benin to Warri, Sapele to Agbor, everywhere, are all impassable yet we have a son as Deputy President of the Senate. He couldn’t lobby the government to reconstruct roads in the state, yet he wants to be governor.

He, however, urged the people of the state not to despair, saying “with God’s will and your support, I will become the next Vice-President of the country and we will attend to all the roads for the benefit of our people.”

On the governorship election in the state, Okowa commended the people for the massive turnout for the rallies and urged them to translate it to votes for all candidates of the party.

He said that God had approved Sheriff Oborevwori as his successor, pointing out that “God made it possible for him to be Speaker of the State House of Assembly and he has remained the longest serving speaker in the state.

“Obviously he has been in a school and God has made it possible for him to become our governorship candidate.

“On behalf of our great party faithful, I want to congratulate the people of Okpe on this great achievement because what God has done no man can change.

“We haven’t come here to campaign because we have been equitable and just by supporting your son to become gubernatorial candidate of the party.

“Only four states score above one million votes and they are all from the North but we must join them by crossing the one million-votes mark.

“Sheriff is not greedy and he has good people management skills and he will not disappoint Deltans. He has promised to complete our ongoing projects and execute more projects for the benefit of the people.”

The governor charged the people to continue to live in peace and remain united as “the more united we are the greater strength and voice that we will have in Nigeria”.

State Deputy Governor, Kingsley Otuaro buttressed the importance of voting all party candidates and urged the people to campaign vigorously across the state.

Immediate Past Governor of the state, Dr Emmanuel Uduaghan lamented that despite the abundance of gas and two power plants in the area the people were still grappling with inadequate power supply.

He however urged the people to vote all candidates of the PDP expressing optimism that Governor Okowa would work towards correcting the present narrative when he becomes the Vice-President of the country.

“So coming here to campaign is not necessary but we thank you for allowing their son to have the gubernatorial ticket and for the massive road infrastructure and entrepreneurship programmes for our people.

“Some of the challenges being faced by the people are on the exclusive list and therefore urged the people to vote Atiku-Okowa ticket to ensure that Okowa addresses the issues affecting the people,”

Oborevwori said he had learnt to be very humble under Okowa assuring that he would deploy his MORE Agenda for the equitable development of the state.

State Chairman of the party, Chief Kingsley Esiso lauded Governor Okowa for the massive infrastructural development in the area.

He said that the coming election was a battle of “no retreat no surrender” adding that the APC had so damaged the economy that over 133 million Nigerians have been plunged into acute hunger and poverty.

He said the party was on a mission to rescue and reset Nigeria and called on the people to join hands with the party to sack APC from Aso Rock.

Director-General of the State PDP Campaign Council, Chief Funkekeme Solomon said the state was growing from strength to strength under the PDP and urged the people to vote massively for all candidates of the party.

He urged Deltans to put aside party differences and support the Delta interest by voting for the PDP to enable Governor Okowa become the first Vice-President from the state.

At Orerokpe, former Minister of Information, Professor Sam Oyovbaire and former Military Administrator of Abia State, Air Vice Marshal Frank Ajobena urged the people of Okpe to support their son and vote all candidates of the PDP.

At the well attended rallies, hundreds of former members of the APC defected to the PDP citing incompetence and the good works of the PDP in the state.